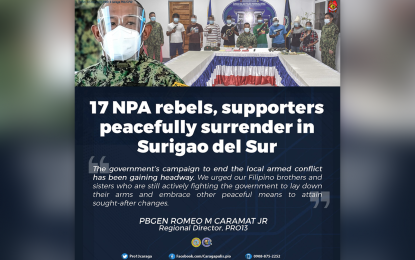 In a phone interview, Col. James T. Goforth, SDSPPO director, told the Philippine News Agency Tuesday that the surrender in Tandag City came after series of negotiations, where the government explained the benefits under the Enhanced Comprehensive Local Integration Program (ECLIP).

“We are thankful to Surigao del Sur Gov. Alexander T. Pimentel for his support in the series of dialogues that led to the surrender of these NPA members,” Goforth said.

He also recognized the support of residents, community leaders, and family members in convincing the 17 NPA members to go back to the fold of the law and their families.

“These former rebels are from the towns of San Miguel, San Agustin, Tago, Marihatag, Cagwait, and Tandag City,” Goforth said, adding they all belong to the NPA’s North Eastern Mindanao Regional Committee.

“With the support of Gov. Pimentel, we are now processing these former rebels for their enrolment to ECLIP for them to receive the programs and services of the government. The benefits from ECLIP will help these former rebels rebuild their lives when they go back to their communities and families,” he added.

Meanwhile, Brig. Gen. Romeo M. Caramat Jr., the director of Police Regional Office in Caraga (PRO-13), in a statement Tuesday commended the SDSPPO for the success of the dialogues and negotiations that led to the surrender of the 17 rebels.

“The government’s campaign to end the local armed conflict has been gaining headway. We urged our Filipino brothers and sisters who are still actively fighting the government to lay down their arms and embrace other peaceful means to attain the sought-after changes,” Caramat said.

The NPA is listed as a terrorist organization by the United States, the European Union, the United Kingdom, Australia, Canada, New Zealand, and the Philippines. (PNA)

Manila to tap US for fertilizer supply, vaccine devt