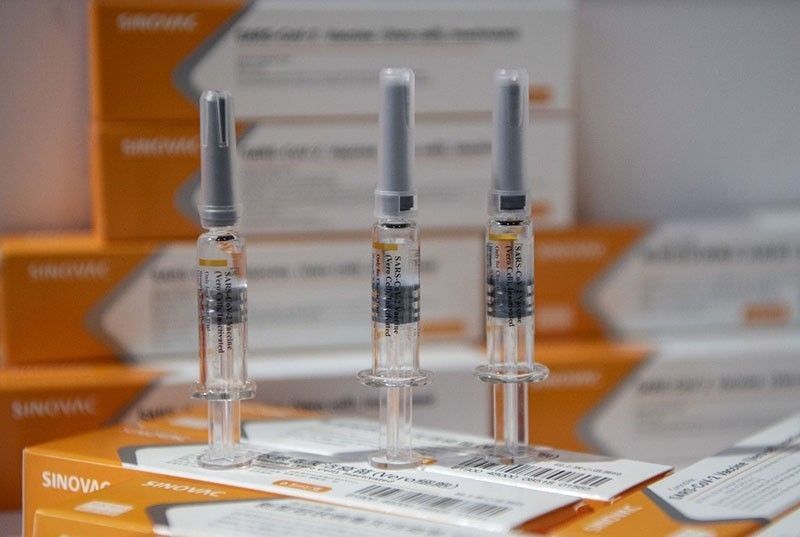 A Sinovac Biotech LTD vaccine candidate for COVID-19 coronavirus is on display at the China International Fair for Trade in Services (CIFTIS) in Beijing on September 6, 2020.

Philippine Ambassador to China Chito Sta. Romana noted that Sinopharm has secured approval for general use in China while Sinovac is expected to hear from Chinese authorities this month,

"Our embassy is in touch with these two companies of course and we tried to facilitate their contact with IATF (Inter-Agency Task Force for the Management of Emerging Infectious Diseases) and if there is any information that is needed," Sta. Romana said at a press briefing.

"We ask them when they will file for EAU with the [Food and Drug Administration] in the Philippines. Apparently, their plan right now, according to them is that they hope to file in the next few days sometime this week," he added.

Last month, President Duterte signed Executive Order No. 121 allowing the FDA director general to issue EUA for COVID-19 drugs and vaccines. An EUA allows the use of COVID-19 medicines and vaccines pending approval by health authorities as long as there is credible information suggesting that the drug or immunization can stop, diagnose, or treat the virus.

Sta. Romana said the results of the use of Chinese vaccines have been "pretty good." He said most of the Chinese business managers and engineers who are involved in infrastructure projects in the Philippines have taken the vaccine.

Critics have criticized the government's plan to buy vaccines from Chinese firms, saying they are less effective and more expensive compared to those produced by other countries. Some senators have also cited reports that the efficacy rate of Sinovac is just 50%, lower than those produced by Western companies. Officials have given assurances that the 50% efficacy rate is compliant with the minimum requirement set by the World Health Organization (WHO) for vaccines.

Last week, the Duterte administration drew flak after it was revealed that some members of the Presidential Security Group (PSG) were given unregistered Sinopharm vaccines. Officials insist that vaccination was legal and was in line with PSG's duty to protect the president.

The private sector is also working with the government to ensure that the Philippines has access to COVID-19 vaccines.

Fernando Zobel of the Ayala group said the private sector has decided to order 450,000 vaccines of AstraZeneca and would be donating doses worth P120 million to the government.

"The total cost as I have understood it is $5.50, with the 50 centavos being for the logistical requirements to bring it in," Zobel said.

"We’re also helping with the distribution which is going to be a very important component in making sure that the vaccines can get to the public," he added.