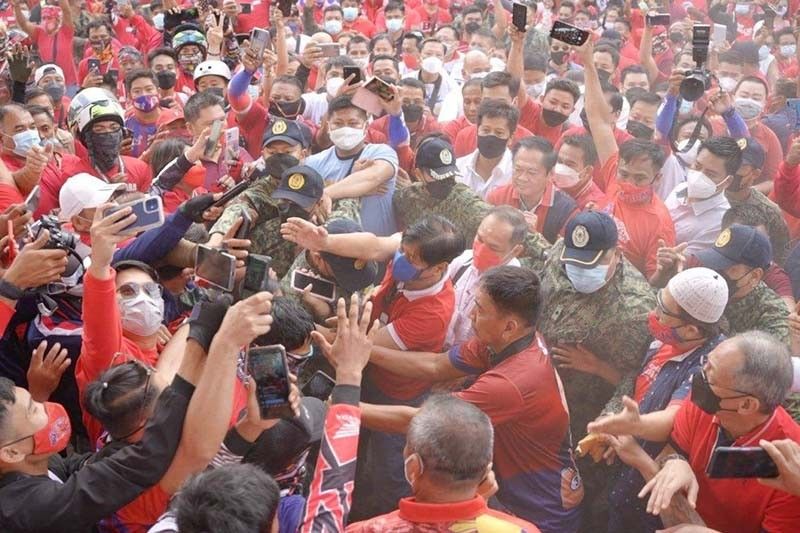 MANILA, Philippines — The Department of Health on Monday urged candidates for next year’s elections to avoid holding campaign sorties that will result in overcrowding.

“We are again appealing to officials and candidates to avoid holding gatherings and events that we know will cause overcrowding and might cause infections in the coming days or weeks,” Health Undersecretary Maria Rosario Vergeire said in Filipino.

The DOH made the remark after the visit of presidential candidate Bongbong Marcos in San Jose City, Nueva Ecija drew large crowds.

“Christmas is approaching so we hope we can keep the number of cases low so we can have a happy Christmas,” Vergeire said.

Daily cases in the Philippines have declined, with the DOH reporting 543 new coronavirus infections on Monday.

According to a guideline issued by the Comelec, handshaking, hugging and kissing and other similar activities are strictly prohibited during in-person campaigning as the country continues to battle the COVID-19 pandemic.

Any form of physical contact during in-person campaigning is a violation of the Omnibus Election Code, which could lead to the disqualification of a candidate to hold public office.

Crowding around candidates and their companions for face-to-face campaigning is also banned as this violates the protocols set by the government for social gathering. — Gaea Katreena Cabico

Get the latest updates on the Philippines' preparation for the May 2022 national elections amid the COVID-19 pandemic. Main image by The STAR/Michael Varcas

Google will pause all electoral and political advertisements in relation to the 2022 national and local elections at the start of the campaign period, the Commission on Elections says.

The campaign period will start on Feb. 8,2022 for national candidates and March 2, 2022 for local candidates.

"Google will not accept election advertisements in the Philippines that are purchased through Google Ads, Display and Video 360, and Shopping platforms that advertisers intend to place on Google, YouTube and partner properties," the poll body says in a statement.

A maximum of 10 voters will only be allowed inside the polling place during the May 9, 2022 elections, the Comelec says.

This is part of the poll body's preventive measures against COVID-19.

More than 10 voters will be allowed for larger polling centers that can accommodate more people. Holding rooms will also be established in adjacent rooms for voters waiting for their turn.

Davao City Mayor Sara Duterte announces on Facebook that she is withdrawing her candidacy for mayor. Her brother Sebastian "Baste" Duterte will replace her.

Bello is included in the potential senatorial slate of a faction of the PDP-Laban.

While Bello is head of the labor department, it is unclear why his potential political plans and publishing press releases about them fall within the mandate of the Department of Labor and Employment.

President Rodrigo Duterte and his long-time aide Sen. Christopher "Bong" Go have arrived at the area at a Pasay City hotel where the filing of certificates of candidacy are filed.

Duterte has openly said he will run for vice president. Go has been nominated to run for president by PDP-Laban but the senator says he is not interested.