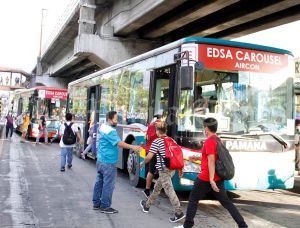 Passengers board a bus at the Edsa Carousel busway at the Mega Q-Mart station in Quezon City. THE monthlong 24/7 free ride on the Edsa Busway rolled out on Thursday, December 1, as the government’s gift to commuters this Christmas season. (PHOTO BGY: MIKE DE JUAN)

(UPDATE) THE monthlong 24/7 free ride on the Edsa Busway rolled out on Thursday, December 1, as the government's gift to commuters this Christmas season.

According to the Department of Transportation (DoTr), the free ride scheme will last until December 31.

The DoTr increased the number of buses traveling the Edsa Busway in anticipation of the influx of passengers this coming Christmas season as malls in Metro Manila begin to operate until 11 pm.

Transportation Secretary Jaime Bautista said the initiative is a way to ensure that all commuters will have a ride beyond the usual operating hours on the Edsa Busway.

“Aside from not having to think about the fare, they can also be sure that their journey will be fast,” he said.

The buses will ply the Caloocan City to the Parañaque Integrated Terminal Exchange (PITx) route with 18 stops in between.

The DoTr is working on adding more pick-up and drop-off points after three were recently added along Taft Avenue, Roxas Boulevard, and One Ayala at the corner of Ayala Avenue and Edsa.

“We are looking at three more stops. SM Mall of Asia and the SM group are helping us, and they are willing to support the funding of some of these stops,” he added.

The Edsa Busway was a concept initiated at the height of the pandemic.

The Department of Budget and Management (DBM) allocated P1.4 billion to extend the free rides from September to December 2022.

However, the DBM slashed the proposed P12-billion allocation for the free rides program in the 2023 national budget.

Bautista earlier disclosed that they are now in the process of completing the terms of reference for the privatization of the EDSA Busway by 2023.

He said once the study is completed, the private sector will be invited to participate in the public bidding, or they can offer an unsolicited proposal, which will be evaluated by the government to be followed by a Swiss challenge.

A Swiss challenge is a form of public procurement operated in some jurisdictions, which requires a public authority that has received an unsolicited bid for a public project, or for services to be provided to the government, to publish the bid and invite third parties to match or better it.

“We are hoping that we should be able to implement this next year. The feasibility study should be finished within the year,” the DoTr chief said.

Bautista said through this move, operations of the EDSA Busway would be more efficient.

“They can increase efficiency of the operation and make it profitable,” he noted. “If all the stakeholders cooperate, there will be efficiency in the operations, so instead of the bus operators competing with each other, it will be one group operating as one.”