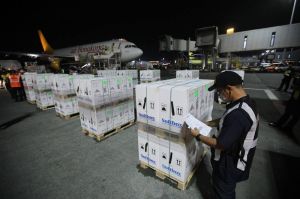 MORE PFIZER VACCINE. A staff of the Bureau of Customs inspects the boxes containing 936,000 doses of reformulated Pfizer vaccine for use by the pediatric population at the Ninoy Aquino International Airport Terminal 3 on Thursday (March 31, 2022) night. (PNA photo by Avito C. Dalan)

PRESIDENTIAL Adviser for Entrepreneurship Jose Maria “Joey” Concepcion 3rd on Saturday said that some 27 million doses of Covid-19 vaccines are set to expire in July this year, emphasizing the urgency for Filipinos to go and get jabbed and, if eligible, get their booster shots.

“Let's not allow 27 million doses of the Covid vaccine to go to waste,” the Go Negosyo founder said in a statement.

Concepcion has been pushing for mandatory booster cards by June to encourage Filipinos to get their third shots.

“Time is of the essence. This is why I am calling it out now while there is still time before these vaccines expire. If we don't use these vaccines, we will have wasted the Filipino taxpayers' money,” he said.

“It's money the Philippines can't afford to waste,” Concepcion said, as he pointed out that the country has recently breached the P12-trillion mark in its debt for the first time, primarily due to massive borrowing in the last two years for its pandemic response efforts.

“Both [the] government and the private sector bought these vaccines for our citizens,” he said.

The Philippines has borrowed P2 trillion, much of it going to vaccines.

So far, the country has received more than 237 million vaccine doses, with some 140.7 million having been administered.

As of March 22, there are 65,343,446 Filipinos who have been fully vaccinated, but only 11,629,565 additional or booster shots have been given. This means only some 13 percent of the eligible population have received their booster shots.

“We in the private sector bought our own supplies through the 'A Dose of Hope' tripartite agreement, and we shared these with the government because we know that vaccines are the solution to battling this pandemic,” Concepcion said.

“We wouldn't have managed to keep our hospitalization rates low and open up the economy without the vaccines,” he said.

Concepcion also said that the Philippines is now one of the countries in Asia that is enjoying low average daily attack rates, or the seven-day average number of cases per 100,000. Healthcare utilization also remains low.

He warned, though, that a double-whammy awaits should Filipinos let down their guard.

“By the second half of the year, the majority of the population will have waning immunity. If cases rise, we will lock down again. And if the conflict in the Ukraine drags on, we will lock down in the midst of rising commodity prices and logjams in the supply chain. Unless we finish all the vaccines in stock and booster everybody that needs it, we risk going back to square one by year end,” Concepcion said.

“We need to push a little, and we need to do the groundwork now. People have become complacent and no longer feel that they need to booster. What they do not see is that the real danger is in the second half of the year,” he added.

Meanwhile, the government is rushing to convince the public to take their primary and booster shots amid repeated efforts to ramp up vaccination coverage.

In a briefing on Saturday, Health Undersecretary Myrna Cabotaje admitted that reaching the population target is hard.

The government set a target of 70 million for the fully-vaccinated, or those who have received their first two doses or a single dose for those who were given Janssen or Sputnik Light by March 31. But as of April 1, the DoH recorded 67 million fully vaccinated Filipinos.

The government also set a target of fully inoculating 90 million Filipinos before the end of the Duterte administration, which is on June 30.

She said that the reason why the country has so many vaccines in its storage was that most of the deliveries from both government and private sector arrived from November 2021 to January 2022, the time when many Filipinos were able to get vaccinated.

Cabotaje said that most of the vaccines that arrived in the country had a shorter shelf life, which is why they are in continuous negotiations with their manufacturers to extend the shelf life.

She also said that most Filipinos became complacent after the country continued to report case Only 12 million Filipinos have, so far, received their booster doses, while some 30 million are now eligible to receive their third shot.

She said that the government will continue to hold “Special Vaccination Days” in areas with low vaccination coverage, as well as the creation of “social mobilizers,” to convince more people to get vaccinated.

Cabotaje also said that they were now discussing the possibility to include boosters as a requirement before coming back to offices, as well as providing booster vaccination cards and requiring them in certain establishments.

Health Undersecretary Maria Rosario Vergeire had thumbed down suggestions to redefine “fully vaccinated individuals” as it may cause confusion especially as some Filipinos have yet to receive their Covid-19 vaccine.

But in a message to The Manila Times, Health Secretary Francisco Duque 3rd said that they were just awaiting expert recommendations on redefining the definition of boosters to encourage more people to get them.

He admitted that unless there is a new surge, complacency will remain a big problem which is why he urged the public and the media to ramp up the information drive on the importance of booster doses.