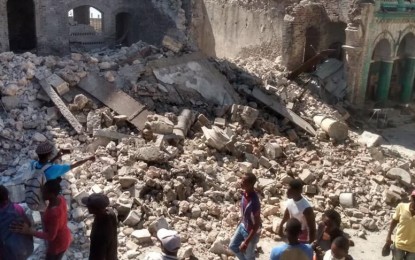 ANKARA – At least 304 people are dead and more than 2,000 injured after a magnitude-7.2 earthquake struck Haiti on Saturday, according to the country’s civil defense agency.

The quake’s epicenter was 12 kilometers northeast of Saint-Louis-du-Sud, at a depth of 10 kilometers.

The US Tsunami Warning System issued a tsunami alert in the region warning that waves could rise 3 meters (9.8 feet). The alert was later lifted.

A magnitude-5.2 aftershock was felt and more aftershocks are expected in the coming days, according to the US Geological Survey (USGS).

“We will make the necessary arrangements to assist people affected by the earthquake in the Southern Peninsula. We must show a lot of solidarity with regard to the emergency. The government will declare a state of emergency. We will act quickly,” Prime Minister Ariel Henry said.

Authorities said hundreds of injuries have been decimated from the ruins in search and rescue efforts, while the exact number of casualties is unknown.

The country, which has suffered huge devastation and tremors, has called for international help.

One of the world’s most deadly earthquakes in the last century occurred in Haiti on Jan. 12, 2010.

According to official figures, 316,000 people died and 300,000 were injured in the magnitude-7.0 quake that occurred in the south of the country.

About 1.3 million people were left homeless in the aftermath. (Anadolu)

Share
Previous Inside their bubbles: Are kids at home growing up happy and healthy amid pandemic?
Next Onyok Velasco gets PHP100-K reward, Chooks-to-Go franchise