Share
Calgary·New
Less than 48 hours after a judge sided with an abused wife in court — allowing her to live in the home she once shared with her husband, who is serving a prison sentence for brutally beating her — Molotov cocktails were thrown through the windows of the house, causing it to burn to the ground.

Police confirm fire is considered suspicious, and they're helping keep the victim safe

Less than 48 hours after a judge sided with an abused wife in court — allowing her to live in the Calgary home she once shared with her husband, who is serving a prison sentence for brutally beating her — Molotov cocktails were thrown through the windows of the house, causing it to burn to the ground.

Natasha Bourdon's home caught fire in the city's northwest community of Nolan Hill on Dec. 3. She wasn't home at the time.

Her story illustrates the dangers some women face when they try to leave an abusive relationship.

"There's so much stigma and shame around domestic violence," said Danusia Bourdon, Natasha's sister. "That's why it thrives, because it's kept in the dark.

"I know that my sister right now feels humiliated. She's a very strong, independent woman, and she can't figure out how she ended up in a relationship like this."

Bourdon's husband, Trevor Deitz, 42, was sent to prison in May for a vicious attack on his wife six months earlier, during which he threatened to kill her, choked her unconscious and broke her wrist. 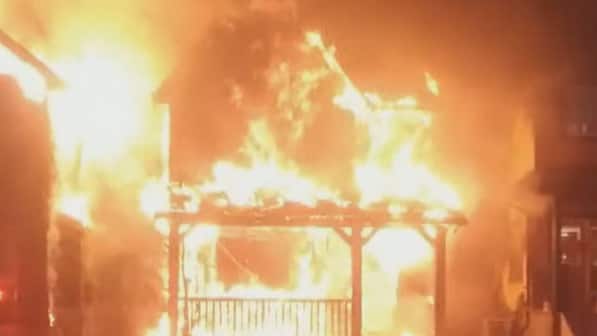 On Dec. 3, less than 48 hours after she appeared in divorce court, someone set fire to Natasha Bourdon's house. (Video: Rodney Welshman)0:10

On Dec. 1, lawyers for the couple appeared in court. Deitz wanted to select the realtor who would sell their home and set the sale price. He also wanted Bourdon to move out so a renter could move in.

But Alberta Court of Queen's Bench Justice Jim Eamon sided with Bourdon, setting the sale price of the house, choosing her realtor to facilitate the sale and allowing her to continue living in the home.

Deitz was also ordered to pay the mortgage until the house was sold.

In the early morning hours of Dec. 3, less than two days after the judge's ruling, the couple's home was set on fire.

The fire destroyed two houses and caused serious damage to two others.

"[My sister] was woken up in the middle of the night with police calling her, saying, 'Are you OK, are you OK?'" Danusia said.

Calgary police confirm the fire is considered suspicious, but because it's under active investigation, officers said they can't confirm whether it's considered domestic in nature and haven't said if they've identified a suspect.

Still, the Calgary Police Service's domestic violence unit is working with Bourdon "to ensure they have an appropriate safety plan in place."

Bourdon's family said the home wasn't protected by insurance, so they've set up a GoFundMe fundraising page called "A Home Destroyed by Abuse and Arson."

Court documents show that Deitz has a lengthy criminal history, spanning his entire adult life, with ties to organized crime.

But when he first got together with Bourdon, he came across as kind and loving. Her grandparents even called him "the gentle giant."

But Bourdon's family said they eventually began noticing troubling signs: Deitz tried to control who Bourdon spent time with, not allowing her to see her mother and sister.

She became a nervous person and lost weight and her confidence.

"The light within her seemed to be dimming," her sister said.

He'd had a rough upbringing, and Bourdon didn't want to be someone on a long list of those who had abandoned Deitz.

"In her mind, there was always this struggle and this back and forth between who he was when he was good and loving her … versus the monster he could be," Danusia said.

In October 2019, Bourdon was planning to leave her husband. She'd tried before, but this time she'd rented an apartment for November.

Deitz became angry at the thought of Bourdon leaving.

Details of Deitz's attack on Bourdon come from an agreed statement of facts filed with the court as part of his guilty plea in May.

On the night of the attack, Deitz closed the windows in his house so that his wife's screams wouldn't be heard by neighbours.

Bourdon was sleeping in the guest room when Deitz began to assault her. He told his wife he'd kill her before he ever let her leave him.

During the assault, Bourdon was choked unconscious, her wrist was broken and she was repeatedly punched in the face.

When he stopped to use the bathroom, Bourdon came to and took the opportunity to call 911 on the cellphone she'd been hiding in the back of her pyjama pants. She whispered for police to come and quickly hung up, hoping officers would show up. They arrived within minutes.

Deitz was within earshot, so Bourdon told them everything was fine. But she was crying and shaking her head, so officers pulled her aside and arrested her husband.

Police searched the home and found a semi-automatic firearm, ammunition and drugs.

Deitz was to go on trial on 12 charges in May, but before Bourdon, who was terrified, had to testify against him, lawyers were able to work out a plea deal.

Midway through the trial, Deitz pleaded guilty to eight offences, including aggravated assault, and was handed an additional two-year sentence to the time he'd already served.

Once released, he'll be on probation for three years. Among the conditions will be a continued no-contact order with his wife.

But Bourdon's family said Deitz has continued to contact her, including having friends reach out to her on his behalf.

Bourdon's family want women in dangerous relationships to pay attention to warning signs, such as controlling behaviour, being isolated from friends and family and any form of physical abuse.

"When he hits you for the first time, no one ever thinks to themselves, 'This is going to end with me dead,'" said Danusia, who urges women in similar situations to call a hotline, talk to a family member and get out before it's too late.

"[Natasha] always says, 'I saw the red flags, and instead of heeding those warnings, I ran around town painting those red flags green.'

"No woman ever thinks that if they stay it's going to end up with them getting severely hurt … or it costing their lives, but in any violent situation that you're in, it can happen and it does happen."

If you need help and are in immediate danger, call 911. Police can help individuals in abusive situations create safety plans by ensuring they have a safe place to go in an emergency, an escape plan, supplies and support.To find assistance in your area, visit sheltersafe.ca or endingviolencecanada.org. In Calgary, those experiencing abuse or violence in an intimate or family relationship can reach out for help by calling 2-1-1 or the Family Violence Helpline, which is available 24/7 at 403-234-SAFE (7233).