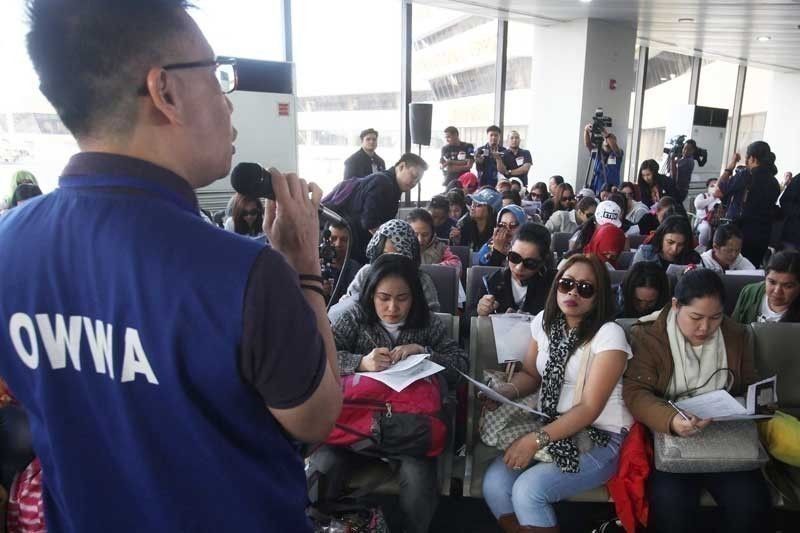 In this file photo, an official of the Overseas Workers Welfare Administration gives outbound Filipino workers a briefing.

The DFA from the period of December 27 to January 2 tallied 63 additional Filipino patients across 84 countries per its daily bulletins.

Officials saw the highest number on December 28 with 19 new cases, followed by 15 from January 2.

Those continuing to receive treatment are now at 3,594, the agency added.

Middle East continues to account for the most number of infections among Filipinos abroad with 7,658, 578 deaths and 4,677 recoveries.

Globally, there are now 84.6 million individuals who have been infected with the COVID-19 a year since Wuhan City in China first reported cases of a pneumonia-like fever.

Countries such as America, the United Kingdom and Singapore have begun vaccinating select members of its population after issuing emergency use authorizations to drugmakers.

There are also 12.1 billion doses reserved among nations for possible vaccines, despite none officially approved for release in the market.

Despite the welcome news brought by vaccine candidates, there are also developments of a new coronavirus variant that had originated in the UK and has now reached other countries.

India (10.3 million), Brazil (7.7 million), Russia (3.1 million) and France (2.7 million) follow in the US among countries with the highest coronavirus count.

The Philippines with its over 477,000 infections, meanwhile, continues to place it at the 29th spot. — Christian Deiparine