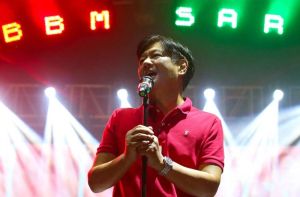 AT least 90 percent, or 73 of the 81 governors in the country, are supporting the presidential candidacy of Ferdinand “Bongbong” Marcos Jr., one of the governors said.

Last Sunday, 16 governors trooped to Marcos' headquarters in Mandaluyong City to affirm their support for the former senator.

“I don't see any unprecedented event that can hamper the victory of Bongbong,” Suarez said, referring to an earlier statement by Narvacan, Ilocos Sur Mayor and League of Municipalities of the Philippines President Luis “Chavit” Singson, that said 90 percent of the governors are for the UniTeam tandem of Marcos and Davao City Mayor Sara Duterte-Carpio.

Singson called on the governors to work doubly hard to make sure that Marcos will be the first “majority president” since the multi-party system was implemented in the country.

Isabela Gov. Rodolfo “Rodito” Albano 3rd said there is no need for UniTeam to campaign in his province.

“Maski hindi ko siya ikampanya sigurado siya sa amin. Mukhang mas mataas pa ang boto namin kay BBM keysa sa Ilocos (Even if I don't campaign for him, he can count on us. It even looks like he will get more votes from us than in Ilocos),” he said.

“We have to show that BBM is the solution. It's really BBM na talagang nagpu-push para sa unity. At 'yan ang hinahanap nating lahat (who is really pushing for unity. And that is what all of us are looking for),” Mandanas said.

Bohol's Arthur “Art” Yap also gave assurances that the majority of Boholanos will vote for Marcos.

Marcos, who leads in almost all the surveys, has to contend with disqualification cases filed against him before the Commission on Elections (Comelec).

On Monday, Comelec Commissioner George Garcia told The Manila Times the poll body will release its decision on the Marcos disqualification cases soon.

Garcia said the Comelec can issue a decision either this week at the earliest or the third week of April.

Several petitioners urged the Comelec to finally resolve the cases they filed against Marcos.

The Comelec has already exempted fuel subsidy for public utility vehicle drivers from the ban.

Garcia also said that due to the high turnout of voters over the weekend during the absentee balloting for Filipinos in Hong Kong, more precincts will be opened there.

The five precincts in Hong Kong will be increased to eight or even 10, he said.