A rom-com that tackles Pinoy fandom

Fan Girl is a rom-com or coming-of-age story, genre-wise. But its theme on Pinoy fandom makes this motion picture more exciting.

Jane, essayed by Charlie Dizon, challenges the rabid fan in her by following Paulo Avelino (played by the actor himself) home. She is about to fulfill a dream of spending a night with Paulo, who allows the teenager to enter into his world away from showbiz’s glitz and glamour. What comes next is something the viewers should look forward to.

Fan Girl, a narrative that seems to merge the real and the reel, is among the official entries for this year’s Metro Manila Film Festival (MMFF), its first-ever online edition.

“It seems very interesting,” said director Antoinette Jadaone of Filipinos’ fan culture or admiration over celebrities in a recent presscon via Zoom. “When we watch our idols onscreen, wala tayong masyadong linya kung ano ang reality at fantasy (we don’t have a demarcation line that separates reality from fantasy). For us, kung ano yung nakikita natin sa idols natin, sa characters nila onscreen, parang feeling natin outside the movie ganun din sila (We seem to consider the characters and the actors one and the same).”

Another example, the director added, is the way viewers look at actors in a loveteam, “People expect them to be loveteams outside the movie. If an actor is a good boy on the big screen, he is also expected to be one off-screen.”

This expectation is one of the many inspirations like celebrity and actors’ culture that led to the conception and production of Fan Girl. Direk Antoinette was grounding her film on something she knew and capturing it on her medium. “Most of the time, magkaiba talaga kung sino sila sa screen (and outside of it). These are the two concepts that I put together.” 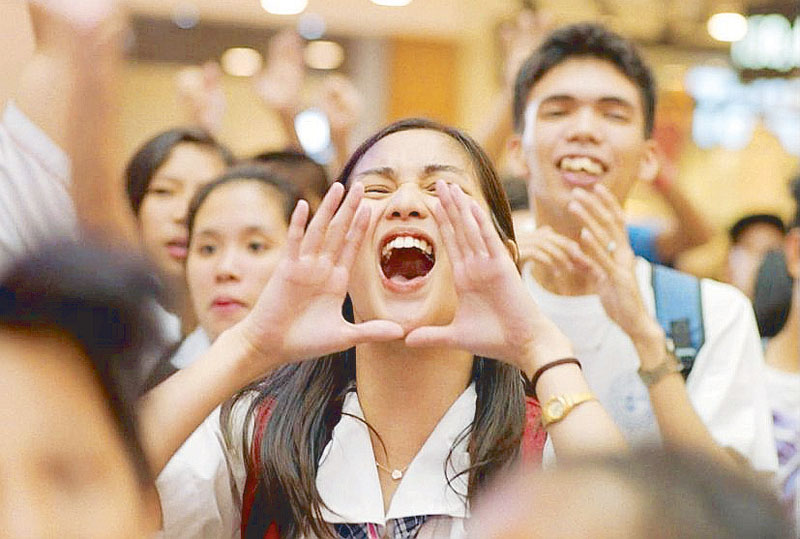 Even if some may find Fan Girl heavy, theme-wise, Antoinette said it is relatable. “All of us are a fan girl or a fan boy. (We don’t necessarily have to be a) fan girl (or a fan boy) of (celebrities), we can all be fans of athletes or bands, (of) K-pop or K-drama and even of politicians. It seems that (the topic of Fan Girl) is close to our hearts. Aside from (that), we like to put artists and our idols on a pedestal.”

According to the director, Fan Girl is “like a rom-com and an anti-rom-com” for it explores fans’ fantasy of getting up close and personal with their idols. “That’s the germ of the entire film,” she said, “pero kung saan saan (ito) napunta dahil yung fan girl natin na si Jane, ibang klase siyang fan girl parang lumaban siya sa idol niya sa buong pelikula.”

Taking on the fan and the idol roles, as you and I know, are Charlie and Paulo, who had their own share of challenges.

“I (could feel the) pressure since it was my first lead role,” said the Rise Artists Studio and Star Magic talent and Four Sisters Before The Wedding star. “The (creative) process we went through was never easy while we were shooting, like direk Tonette asked me to do method acting. Overall, I’m happy with what we have done in the movie. More than me feeling pressured, I’m now more excited.”

Before they tried their hand at doing showbiz, Paulo and Charlie were also fans. “I grew up watching the movies of FPJ, (Fernando Poe Jr.) Tito Bo (Christopher de Leon) and Dolphy,” Paulo said.

Charlie recalled that her Grade 4 self then went to Richard Gutierrez’s mall show and there, she experienced “na makipagsiksikan sa mall show (to be with other fans) and to join a game (segment). I was able to go backstage.”

Now, Charlie is living the life of a young star. By the way, she was chosen among 600 plus auditionees.

Add Fan Girl in your must-see movie list this MMFF season from Dec. 25, until Jan. 7, 2021. It is available worldwide via UPSTREAM.ph for P250. Book your movie tickets in advance via bit.ly/WatchFanGirl.

Share
Previous The Prom: A showbiz tale worth telling
Next Sylvia: It’s the story of my family