A tale of 2 presidential candidates 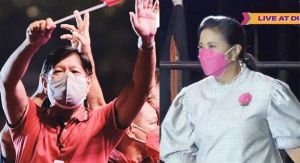 ALL roads led to Manila and Macapagal Boulevard in Pasay City on Saturday where frontrunning presidential candidate Ferdinand “Bongbong” Marcos Jr. and rival Vice President Maria Leonor “Leni” Robredo held their respective rallies at the homestretch of the election campaign.

Marcos and his UniTeam painted the 1.1-million vote-rich city of Mayor Francisco “Isko Moreno” Domagoso, another presidential candidate, red, while Robredo and her supporters were a sea of pink under the night sky.

Marcos, who in the Kalye Surveys also released on Saturday, is the preferred candidate in 40 out of 45 provinces, was with his running mate Davao City Mayor Sara Duterte-Carpio and their Senate candidates Sen. Juan Miguel “Migz” Zubiri, former senators Jose “Jinggoy” Estrada and Gregorio “Greg” Honasan 3rd, and former Malacañang spokesman Harry Roque Jr., among others.

Duterte-Carpio, daughter of President Rodrigo Duterte, joined Marcos at the Manila rally after she visited Bulacan, her fifth trip to the vote-rich province since the election campaign began.

She met with local officials and community and sectoral leaders during the “Sara para sa Barangay” at Don Caesareo San Diego Gym Poblacion and was accompanied by Plaridel Mayor Anastasia “Tesie” Vistan.

It was a star-studded affair at Macapagal Boulevard as stars joined Robredo who celebrated her 57th birthday.

Earlier in the day, reports of Communist leader Jose Ma. Sison's admission that he was Robredo's adviser surfaced, which she denied, saying she does not link up with individuals or groups espousing violence. Sison, in a separate statement, branded the reports “fake news.”

The National House-To-House Day and People's Rally started at 2 p.m., with an art jam, in which National Artist Ben Cab unveiled his “Saranggola ni Leni.”

The Kalye surveys as of April 20 were conducted in 51 provinces with 150,063 respondents but Splat was still awaiting data from the six provinces of Antique, Basilan, Batanes, Camiguin, Dinagat Islands and Guimaras.

In the first episode, Marcos was the top choice in 13 out of 14 provinces with data already obtained, while he was second in the only province where he was not the top choice.

Robredo, on the other hand, topped in only one out of 14 provinces in the cluster, which was the province of Albay.

“Aside from Albay, she is either second-ranked to last place in the other 13 provinces presented,” Splat said in its analysis.

Splat said 17 provinces were included in this episode, but they have yet to obtain data from the provinces of Antique, Basilan and Batanes, hence only 14 provinces were counted.

In the second part of the series of videos, there were 15 provinces, but data have yet to be received from Camiguin and Dinagat Islands.

Marcos got the majority or top preference shares in nine out of 13 provinces with data already available.

He got the highest preference shares in Cagayan, where he scored 96 percent.

“He was second in the four other provinces that he did not top,” Splat noted.

The vice president got her highest preference shares in Camarines Sur, where she recorded 80.7 percent.

“In the 10 other provinces, she ranked second to fifth,” Splat said.

In this episode, Sen. Emmanuel “Manny” Pacquiao had the top preference shares in Davao Occidental, while Mayor Domagoso and Sen. Panfilo “Ping” Lacson did not top in any of the provinces.