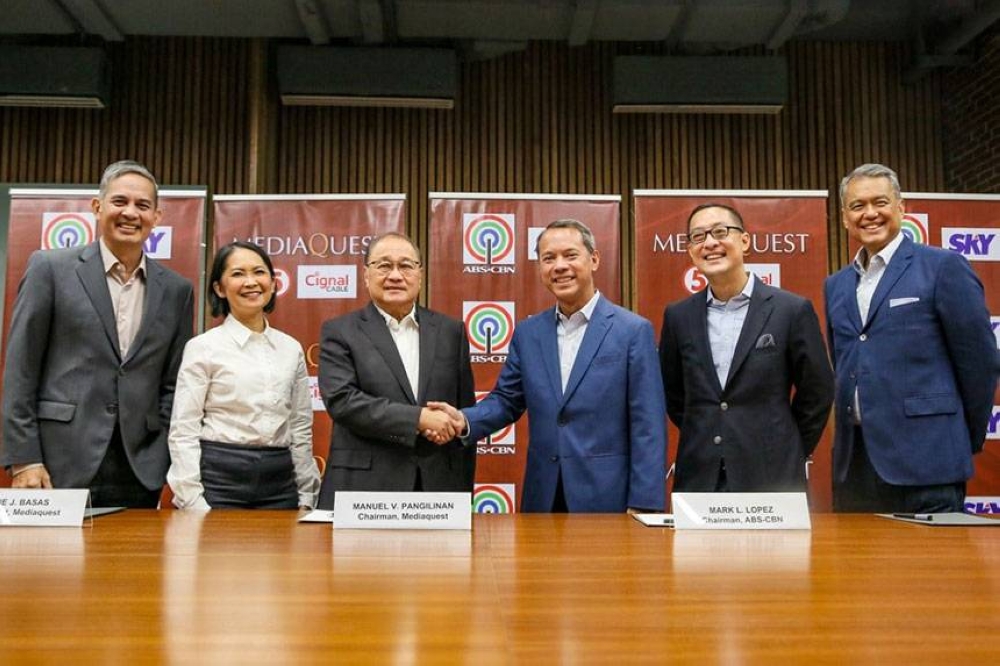 (UPDATED) THE media company ABS-CBN Corp. has acquired a substantial stake in TV5 Network Inc., paving the way for a “strengthened partnership” between the two former rivals.

In a disclosure to the Philippine Stock Exchange, ABS-CBN said it will acquire 6,459,393 new primary common shares in TV5, which is equivalent to 34.99 percent of the total voting and outstanding capital stock of the network owned by the PLDT group of Manuel V. Pangilinan.

The total value of the deal is P2.16 billion.

Once the deal is inked, the total holdings of MediaQuest Holdings, the media investment vehicle of the PLDT group, in TV5 will be reduced to 64.79 percent of the total voting and outstanding capital stock.

MediaQuest will stay on as TV5's controlling stockholder.

The two parties will also sign a “convertible note agreement” that will allow ABS-CBN to buy more TV5 primary common shares after eight years and raise its equity to no more than 49.92 percent of the network's outstanding capital stock.

To fund the acquisition, ABS-CBN, together with Lopez Inc. and Sky Vision Corp., will sell 38.88 percent of its shares worth P2.465 billion in SkyCable Corp. to Cignal Cable Corp. (formerly Dakila Cable TV Corp.).

Cignal Cable is the cable subsidiary of Cignal TV Inc., the country's largest pay-TV provider with more than three million subscribers in its Cignal and SatLite satellite television brands.

It also agreed to issue an exchangeable debt instrument to Cignal Cable for P4.388 billion, which means that Cignal will be able to obtain 841,219,527 shares, or 61.12 percent of SkyCable's shares after eight years.

The two parties described the transaction as “transformational” and designed to enhance TV5's capability to deliver content and coverage in the areas of entertainment, news, public service and sports.

The deal is seen to expand the private sector's role of supporting efficient and reliable public services, which TV5 is expected to provide through its nationwide network.

Pangilinan welcomed the arrival of ABS-CBN to TV5, noting that the network has been the “leading developer and provider of Filipino-related entertainment content not only in the Philippines but overseas as well.”

“Our companies have always had these cherished values of providing top and quality programs in the service of the Filipino people and together we believe we can achieve this in greater measure and success,” he added.

“We look forward to be of greater service to the public as we come together in taking TV5 to the next level,” Lopez said.

ABS-CBN President and Chief Executive Officer Carlo Katigbak said the investment in TV5 is “consistent” with its goal to evolve into a content company with as wide an audience reach as possible.

Katigbak said he hoped that the industry evolves from being “highly-competitive” to “increasingly collaborative,” which will benefit stakeholders in the long run.

“In partnership with TV5, we look forward to reaching viewers both on owned platforms and through other broadcast partners, thereby enriching the Philippine creative industry,” Katigbak said.

Prior to the deal, TV5 has been airing ABS-CBN shows on a blocktime basis since 2021, such as “ASAP Natin Ito,” “FPJ's Ang Probinsyano” and “It's Showtime.”

Congress refused to issue a new franchise to ABS-CBN in 2020.

In an interview over government radio station Radyo Pilipinas, National Telecommunications Commission (NTC) chief Gamaliel Cordoba said the commission will look into the proposed joint venture, noting that ABS-CBN had “many violations” when its franchise was investigated by Congress.

Cordoba said the NTC had issued a new memorandum order urging franchise grantees not to enter into mergers, joint ventures, sale or commercial arrangements to those with outstanding obligations to the government.

“Kailangan itong busisiin dahil ayon po sa memorandum order, isasubmit nila ito (We need to study this further because according to the memorandum order, they need to submit this) together with the appropriate clearances from other government agencies,” he added.