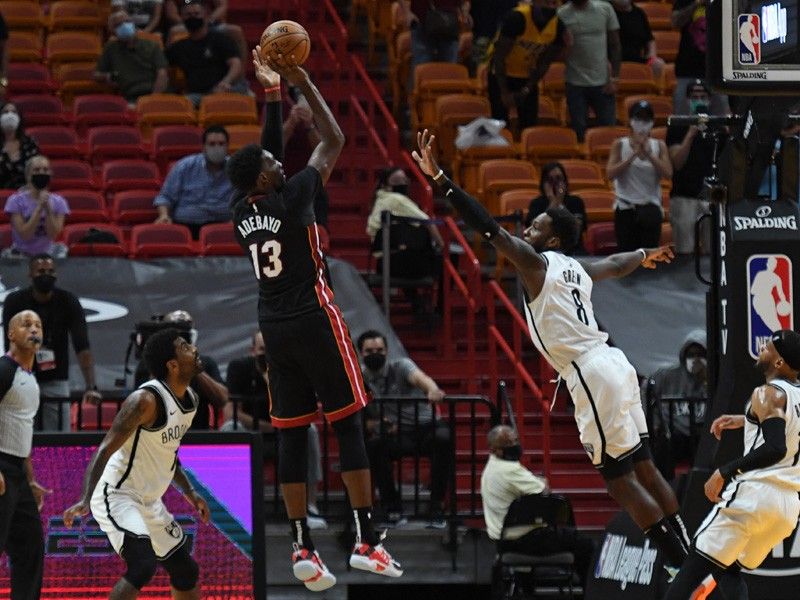 LOS ANGELES – Bam Adebayo hit a thrilling game-winner at the buzzer on Sunday (Monday, Manila time) to lift the Miami Heat to a 109-107 victory over the Brooklyn Nets, who lost superstar Kevin Durant to another injury.

American Adebayo nailed a step-back 14-footer from the baseline as the Heat snapped a three-game losing skid.

Both teams were short-handed with the Heat playing without Jimmy Butler (sprained ankle) and the Nets already without James Harden, who has a hamstring injury.

Durant scored Brooklyn's first eight points before exiting the game with just under eight minutes remaining in the first quarter.

The 11-time All-Star was driving to the basket when he clashed knees with Heat forward Trevor Ariza. Durant suffered a left thigh contusion.

Durant returned to the Nets' lineup April 7 after a 23-game absence because of a hamstring injury. He has averaged 23.8 points while playing in four of the Nets last five games.

Adebayo drove left, pulled up and launched a 14-footer as time expired. Adebayo knows his role with the team but still likes to get the green light sometimes from the bench during key moments in the game.

"He handled it the right way," coach Erik Spoelstra said. "He looked over to the bench, and at that point we just made eye contact. My hands were up, and it was like, 'OK, it just better be the last shot.'"

Landry Shamet scored a career-high 30 points and made seven-of-12 from beyond the arc and Kyrie Irving chipped in with 20 points and nine assists for the Nets.

"They were playing well, hitting a lot of shots, so you've got to give credit, like I always say," Irving said. "But there were definitely some preventable plays out there that I feel like just could have been better."

In New York, Julius Randle finished with 33 points and 10 assists as the New York Knicks withstood a 34 point performance from Zion Williamson by beating the New Orleans Pelicans 122-112 in overtime.

Derrick Rose came off the bench to score a season-high 23 points and RJ Barrett tallied 18 as the Knicks beat the Pelicans for the second time in three games. Both Barrett and Reggie Bullock, who had 15, contributed offensively before fouling out.

Williamson also had nine rebounds and five assists, Eric Bledsoe scored 22, Brandon Ingram added 19 for the Pelicans, who lost in overtime for the second consecutive game.

Randle nailed two free throws with just over two minutes to go in overtime to give the Knicks a 112-105 lead and New York cruised from there.