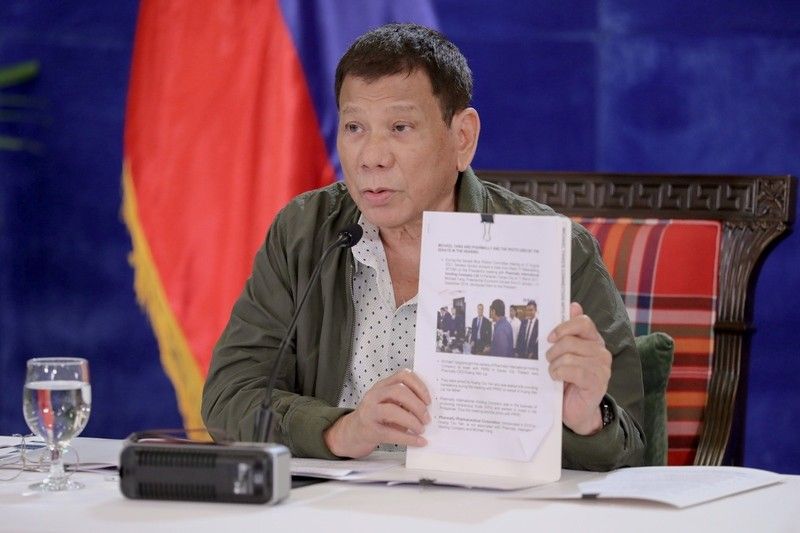 MANILA, Philippines — Senate Blue Ribbon chairman Richard Gordon on Friday called out President Rodrigo Duterte for incessantly attacking the panel and its hearings on reported deficiencies in pandemic spending that have closed in on individuals linked to the chief executive.

Duterte has sought to discredit the Blue Ribbon probe since it began.

He has accused senators, Gordon, especially, of politicking ahead of the 2022 elections and lambasted the Commission on Audit for flagging the "deficiencies" which spurred the hearings in the first place.

Duterte also threatened to audit the Philippine Red Cross, which Gordon chairs, even though it is a non-governmental organization.

Earlier this week, the president also required members of his Cabinet to seek his permission before attending congressional hearings.

"Today, I tell you, you are not the president the Filipino people can respect," Gordon said, addressing Duterte directly in his opening statement. "You are a cheap politician."

The president earlier said that he was indebted to both of them.

Lao, as then-chief of the Department of Budget and Management's procurement service, signed off on the government's numerous and anomalous contracts with Pharmally Pharmaceutical Corp. in 2020 which was incorporated just a year prior with a paid-up capital of P625,000.

Meanwhile, Yang has been identified by Pharmally's chairman as the firm's financier and guarantor to Chinese suppliers. He was also present at a 2017 meeting between Duterte and Pharmally executives in Davao City.

Gordon said Duterte is acting as if he is a personal attorney for Lao and Yang rather than the country's president.

"[The president] is the emerging defender of those involved in the anomalies [being investigated] here," the senator said in Filipino.

"Let's not use indebtedness….as a license to steal and commit fraud."

Gordon is a relatively new critic of the president.

In 2016, he presided over hearings on the administration's "drug war," the committee report for which absolved the president and the state of accountability for the thousands of extrajudicial killings linked to the campaign.

The Senate minority disagreed with the report's findings, with Sens. Leila de Lima and Francis Pangilinan filing their own dissenting reports.

READ:Amid promised oversight of anti-terror law, how has the Senate probed past abuses?

Gordon has also been accused of piling on to the Duterte administration's attacks on De Lima who has since been detained for almost five years on drug charges which she says are trumped up.

But the minority bloc manifested their support for Gordon on Friday for what they called his "courage" and "zeal" in pursuing the probe amid continued attacks on him and the committee.

"I take the floor to spread into the record my admiration and my congratulations to Sen. Gordon," Senate Minority Leader Franklin Drilon said, a sentiment echoed by Sens. Risa Hontiveros and Pangilinan.

Hotniveros, in her own manifestation in support of Gordon, added: "I am certain that our colleague in the minority Sen. Leila [De Lima], if she were here, would do the same." — Bella Perez-Rubio