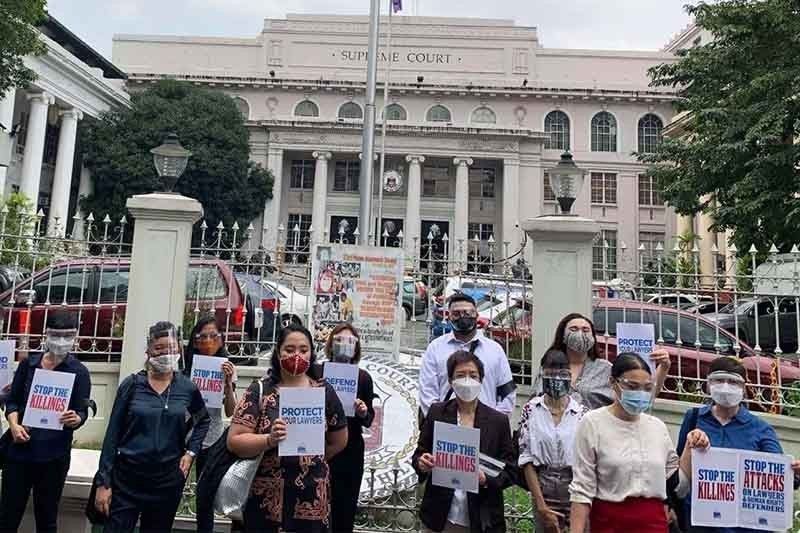 Lawyers submit a letter to the Supreme Court on December 22, 2020 urging action on the killings of lawyers.

MANILA, Philippines — An order temporarily stopping the implementation of the reviled Anti-Terrorism Act can help deter continuing attacks against petitioners and their counsels, lawyers told the Supreme Court.

Human rights and Indigenous Peoples’ lawyer Angelo Karlo Guillen, counsel of anti-terrorism law petitioners, was stabbed in the head and on shoulder by two unidentified men on Wednesday night.

Legal counsels on Anti-Terrorism law pleas said in a joint statement the Guillen is just the latest victim among their fellow petitioners and lawyers. Anti-terrorism petitioners and counsels have been threatened by Lt. Gen. Antonio Parlade, while some have been arrested or red-tagged and put under surveillance.

"The issuance of a TRO on the enforcement of the ATA pending the final adjudication of the 37 petitions could help address the worsening situation," they said in a joint statement.

Lawyer Evalyn Ursua, in a virtual presser, noted what she said was the irony of oral arguments on their petition against the anti-terrorism law pending in court amid threats, harassments and attacks against them outside the proceedings.

Rep. Edcel Lagman (Albay), one of the oralists in the debates, added: “The best statement that would come from SC in order to abate these senseless killings and assault on lawyers and judges would be issuing the [temporary restraining order] so the implementation of the ATA is stopped pending final adjudication ng 37 cases.”

Petitioners have been prodding the SC to grant their prayer for relief from the enforcement of the law as the oral debates extends to another month, and for a fifth session already.

Lawyer Howard Calleja said a TRO on the law may bring a “ceasefire.”

“We see that pending the [resolution of petitions against the] ATA, the attacks continue and all of us 37 petitioners have been red-tagged already… Maybe this is one way to wake up the SC and to really have a ceasefire for everybody,” he added.

The anti-terrorism law counsels called on their colleagues in the legal profession to condemn the attacks and go beyond issuing statements of condemnation. “We urge members of the legal profession and various law groups to launch a more active and militant response to these attacks,” they said in a statement.

“We call on the Supreme Court as the constitutionally-appointed guardian of civil liberties and protector of the legal profession to make immediate measures to stop these attacks,” they added.

Rights lawyer Ursua, also one of the oralists in the anti-terrorism law debates, stressed that they are directing the pleas to the SC since as lawyers, they are under the high court’s jurisdiction.

“Lawyers are considered the last line of defense in protecting the rights. If we are being killed, who will defend our people?” she said, adding that the immediate action of the SC on the latest attack on them is important.

“It has to be the SC to demand [action] from the executive branch,” Ursua added.

Integrated Bar of the Philippines President Domingo Egon Cayosa added that the SC has big responsibility in this. “The root of these relentless attacks is the culture of impunity,” which Cayosa said, is also due to delayed administration of justice.

He said the SC can direct judges to prioritize the cases involving killed lawyers, while the Department of Justice, although under the executive branch, can tell prosecutors to also focus on these cases.

“The public has to see that there is justice, especially for those who implement justice,” he also said.

The anti-terrorism law counsels added: “We call on the people to demand from the Government to stop the killings and escalating violence and impunity that have seriously eroded the rule of law and our democratic order."