After miscommunication, broader travel ban on 20 territories finally sure 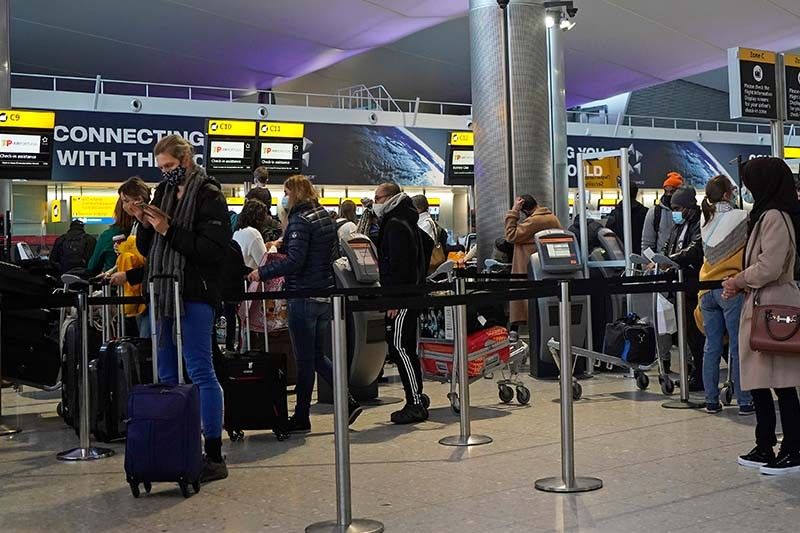 Customers wearing face covers queue at a TAP Air Portugal check-in desk in the departures hall at Terminal 2 of Heathrow Airport in west London on December 21, 2020, as a string of countries around the world banned travellers arriving from the UK, due to the rapid spread of a new, more-infectious coronavirus strain.

MANILA, Philippines — After what can only be described as a lapse in communication on the part of the national government, it's finally final: foreign travelers coming from areas where the new strain of the coronavirus disease 2019 (COVID-19) first recorded in the United Kingdom will be banned from entering the country.

In a statement, presidential spokesperson Harry Roque said that President Rodrigo Duterte had approved "the extension of the temporary suspension of flights from, and the prohibition of entry on all travelers coming from or transiting through, the United Kingdom until January 15, 2021."

Also approved, he said, was "the prohibition from entering the Philippines effective December 30, 2020, 12:01 AM until January 15, 2021, of all foreign travelers coming from, or transiting through, the following countries/areas listed below or who have been to the same places mentioned below within 14 days preceding arrival in the Philippines."

Areas listed in the statement include:

"Effective immediately, passengers who are already in transit and arrive before December 30, 2020, 12:01AM, from the 19 countries / areas listed above, including those who have been to the same places mentioned in Paragraph B within 14 days immediately preceding arrival in the Philippines, shall not be prohibited from entering the country. However, they shall be required to undergo an absolute facility-based 14-day quarantine period, notwithstanding a negative RT-PCR test result," Roque's statement read.

"Also, effective immediately, Filipino citizens coming from countries / areas in Paragraphs A and B, or who have been to the same countries / areas within 14 days immediately preceding arrival in the Philippines, shall be allowed to enter the Philippines. However, they shall be required to undergo an absolute facility-based 14-day quarantine period, notwithstanding a negative RT-PCR test result," he added.

It was Roque himself who sparked the initial confusion after he denied the first announcement from the Manila International Airport Authority, which oversees Manila’s main gateway, that the Philippines was prohibiting people from 19 more territories, in addition to the United Kingdom, from flying in.

MIAA tweeted that decision on its official account, only to be deleted after Roque’s pronouncements at a press briefing where he was quoted as saying: “If you ask me, is there currently a travel ban? My answer is no. Will there be? Perhaps. Anong detalye? (What are the details?) Let's wait for it."

This came after the health and labor departments, apart from the MIAA, already confirmed the travel bans on foreigners in separate statements. For a while, whether the announcements still stood were up in the air without a formal word from any of the parties to clarify the contradicting statements. “We have deleted the posted advisory and will post an updated one as soon as possible,” the Department of Transportation, under which the MIAA is an attached bureau, told reporters following the commotion.

"The Bureau of Quarantine and the Overseas Workers Welfare Administration are directed to ensure the strict adherence to quarantine and testing protocols for returning Filipinos and overseas Filipino workers and provide line list to the local government units to ensure that the 14-day quarantine is completed and monitored," Roque also said in his statement, sounding sure of himself this time around.

Share
Previous Duterte refuses to submit reports on use of intel funds to Congress
Next Rains seen in NCR, other parts of Philippines by end-2020