After spike in reported cases, Filipinos abroad with COVID-19 now at 12,627 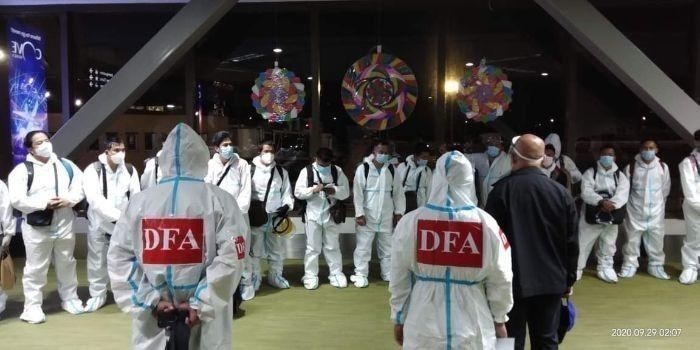 In this Sept. 29, 2020, photo, the officials from the Department of Foreign Affairs welcome home 16 stranded Filipino seafarers and three land-based overseas Filipino workers (OFWs) from China.

The foreign affairs department in a bulletin said four more Filipino patients were reported on December 20 in the Americas.

Significant increases in five days were seen in the said time frame, with the most number of additional cases reported on December 15 at 96 cases.

Officials have since attributed the huge increases to late reports from various countries.

Deaths, meanwhile, are now at 866 after three new Filipino fatalities were logged today.

Recoveries saw one more patient getting better to bring the total to 8,127, while 3,634 remain receiving care to date.

On December 17, officials announced that one more country in the Middle East had reported Filipino cases. This means that there are now 83 nations in total with Filipino COVID-19 patients.

The Middle East continues to hold the most number of infections at 7,626, while deaths have reached 553 and recoveries at 4,668.

Asia Pacific follows with 2,634 cases, 1,815 recoveries and keeping its death toll at a slim 21 compared with other regions.

Europe continues to account for 1,586 Filipino infections, with 97 deaths and 1,119 patients who had since gotten well.

The Americas account for the least number of cases at 781, but it also holds the second highest fatality count at 195, while those recovered are at 525.

Ten days before what has been a tumultuous year for the world, the coronavirus pandemic has infected 76.3 million individuals in 191 countries.

Deaths have also reached 1.68 million, with the United States continuing to lead in both infections and fatalities count at 17.6 million and over 316,000, respectively.

The Philippines with its nearly 460,000 cases by December 20 places it at the 28th spot among countries with the most infections, per figures from the John Hopkins University and Medicine. — Christian Deiparine