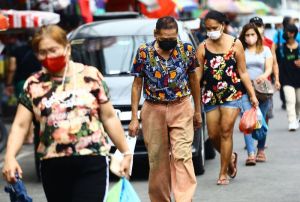 A POSSIBLE escalation to Alert Level 2 in the National Capital Region (NCR) is unlikely even if cases have slowly increased, according to the Department of Health (DoH), clarifying an earlier statement it made on Monday.

The Inter-Agency Task Force for the Management of Infectious Diseases (IATF) has also ruled to keep the Alert Level 1 status in Metro Manila for the remainder of June, Malacañang said Wednesday.

Health Undersecretary Maria Rosario Vergeire said that despite an increase in the number of cases in Metro Manila, there is no need for the DoH to put the region under Alert Level 2.

For an area to be under Alert Level 2, it must have at least an average daily attack rate (ADAR) of above six cases per 100,000 population over the past two weeks, its bed utilization rate must have reached the moderate risk level, as well as full vaccination coverage of at least 70 percent in the A2, or senior citizen population and 70 percent among the target population.

Vergeire said that in Metro Manila, the ADAR is around less than 1 case per 100,000 over two weeks, while the current bed utilization remains under low risk.

For it to be under Alert Level 2, it should have an equivalent of 818 cases per day for a two-week period. The current average of the region is at 170 cases per day in the past two weeks.

“We are not seeing a faster rate of increase for us to escalate soon…[but] we need to closely monitor [this] because nothing is certain,” Vergeire added.

Of the six BA.5 cases, two came from NCR and one case each was detected in Cagayan Valley, Western Visayas and Northern Mindanao. The location of the last case is still being verified.

Four of the six cases were fully vaccinated and the rest are being checked. Five of them have already been tagged as recovered, and one is still undergoing home isolation.

Meanwhile, 10 additional BA.2.12.1 cases were detected in the country — four in NCR, two in Calabarzon (Cavite, Laguna, Batangas, Rizal and Quezon) and one each in Cagayan Valley, Bicol and Western Visayas. A returning overseas Filipino was also infected with the strain.

One case remains active, eight have been tagged as recovered, and one is still being verified. As to their vaccination status, three were fully vaccinated and the rest are also being verified.

All of the variant cases have their exposures still unknown and their travel histories are still being verified, according to the DoH.

Despite this, Vergeire said that the increases that are being experienced in some areas of the country cannot be ascertained by the presence of the subvariants.

“We cannot be very certain that the driver of our infections are the subvariants, but we are assuming that they are already here and causing this transmission,” she said during a briefing on Wednesday.

“We expect the vaccines will protect us provided people will get boosted because there is waning immunity and there is T-cell immunity that is longer than antibody immunity. But, we do not need to be complacent and people should get boosted as well,” Salvana added.

Vergeire warned that if Filipinos will reduce their compliance to the minimum health protocols, will not get their first booster shot, and the presence of the Omicron subvariants remains in the country, there could be at least 4,800 hospitalizations by August, much higher than the available beds for severe and critical cases.

In a separate interview with the ABS-CBN News Channel, Vergeire warned that it would be risky for local government units to lift the mask mandates, as it may lead to an increase in transmissions.

Her comments come after Cebu Governor Gwendolyn Garcia issued an executive order that allows optional use of masks outdoors in her province, while Quirino Governor Dakila Cua is also considering a similar move.

“If you as a local government would announce [the removal of masks] to the public, that might be risky, especially now that we have [case increases] of subvariants in the country and we have waning immunity. So this is something that could be risky for their population,” Vergeire said.

Vergeire believes that the mask mandate should continue until the end of the year, as it not only helped the country protect itself from Covid-19, but from other respiratory diseases such as monkeypox.