MANILA, Philippines — Bonifacio Global City has upped its reputation as a safe haven for cyclists on Wednesday with the launch of Allianz PNB's Bikeyard.

Launched as part of Allianz PNB's Ride Safe campaign, the Bikeyard was opened to cyclists as a venue to rest and restore their bikes as they traversed BGC.

The Bikeyard, found on 28th Street, Lane O, is a spot for cycling enthusiasts to park their bikes and relax for a while, as well as tune up their two-wheeled vehicles with a solar powered bick repair kit. 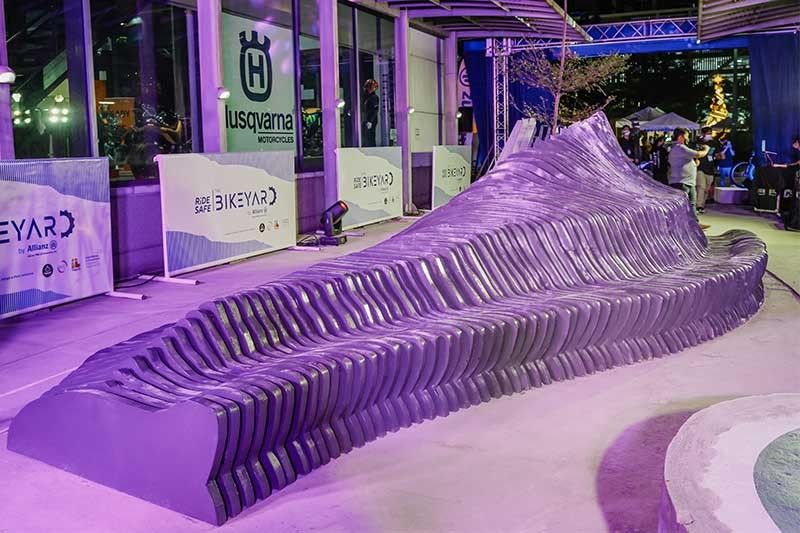 10 Solar powered bike repair kits are scattered in BGC, including one in the Bikeyard itself

"The original idea cme with the onset of the pandemic. Basically, there was a necessity for cycling because there were no other means of transportation," said Allianz PNB President and CEO Alexander Grenz about the Ride Safe campaign and the Bikeyard.

"What I appreciated a lot, at the very beginning, a lot of LGUs have [already] taken initiative to establish bike lanes and building up bollards, to help cyclists and protect them — make it safer for them," he added.

Allianz PNB has already worked with two LGUs prior to BGC, with the company setting up bike racks in Manila, and building the first-ever solar-powered bike pit stop in San Juan.

In BGC, some nine other bike repair kits are also scattered across the community apart from the one already in the Bikeyard.

The Bike racks are also made from recycled and biodegradable materials.

"It's sustanable mobility which we are promoting very much as part of our sustainability agenda in Allianz," said Grenz.

Now, with the cycling community continuing to grow in the country as the COVID-19 pandemic rolls on, Grenz said that Allianz PNB also sees its Ride Safe campaign expand to the provinces.

"We are in discussion already with different provinces as well," Grenz said.

"We want to not only focus on NCR," he added.