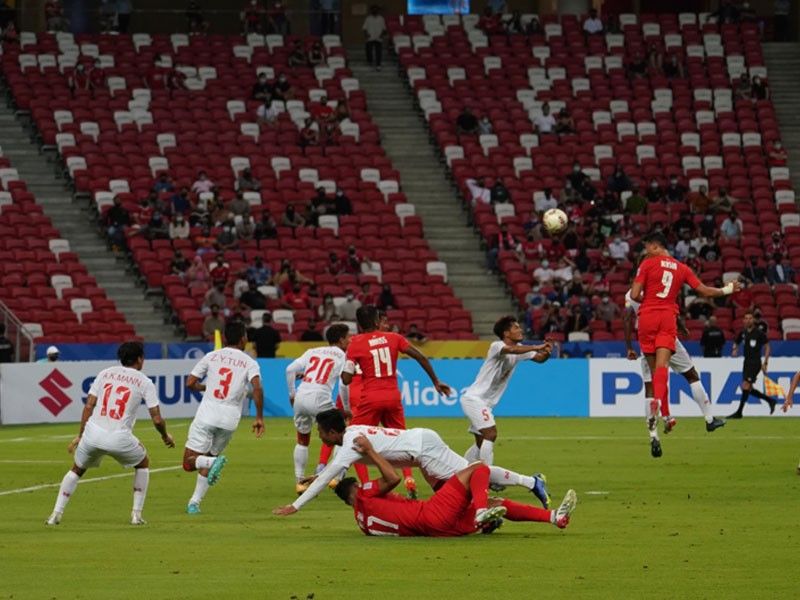 MANILA, Philippines – A devastating show of might in a 12-minute stretch propelled hosts Singapore to a rousing start in the 2021 AFF Suzuki Cup with a 3-0 win over Myanmar.

Defender Safuwan Bahrudin opened the scoring with a towering header in the 34th minute off a corner while striker Ikhsan Fandi blasted a shot from the right side just inside the box in the 39th minute, and then headed in another — also from a set piece — in the first half injury time for all the scoring the match needed.

While Singapore showed intent in the first few minutes preferring to play off the middle, Myanmar swarmed all over the hosts to dispossess them and launch their own sorties against veteran Lions keeper Hassan Sunny.

It looked like Myanmar would score first as they were able to get their cross in from the right flank. But here is where it became evident they were in trouble — they did not win the aerial battle and not much of the first balls.

In the first goal by Baharudin, Myanmar’s center back Zaw Ye Tun was more than a second late in covering the former. Furthermore, Zaw is what — 5-foot-5? Bahrudin is almost six feet tall.

What was wrong in that first goal? It was Myanmar’s alignment on defense.

Four Lions players were left unmarked, affording them more than a second to react to the ball. All Ikhsan Fandi needed to do was place it right.

The second goal that was scored by Ikhsan, all the Lions’ striker needed to do was beat Shakir Hamzah 1v1 and he was in a good position to fire in the opposite side. It was a very good goal, more so since Lions midfielder Faris Ramli nearly made a mess of things by drifting in the same area as Fandi. That meant Ramli’s defender was closing the gap too. It was a very good strike by Ikhsan.

His second goal was similar to Baharudin’s. This was off a set piece from some 28 yards out. Myanmar mid-fielder Maung Lwin was able to cover Fandi.

Lin is a bit taller than Zaw at 5’8” but the three-inch advantage and timing on Fandi’s part won the day. And Burmese left back Kyaw Win Moe was more than an arms’ length away to contest Fandi.

I thought that even before Singapore began their rampage, I didn’t like Myanmar’s spacing. On defense, you would see five players covering an area and the Lions would flip the ball in the air to beat that.

Even the disallowed goal saw Lions centerback Irfan Fandi (Ikhsan’s brother) won the cross that led to what could have been a hat trick by Ikhsan were it not for an offside call.

Even on offense, Myanmar was able to race down either side of the flanks but not able to get enough bodies inside the box. Had they scored early, it could have possibly been a different story.

Myanmar has good ideas. Especially coming from their midfielders. They just need to pull it off and be faster in their decision-making.

As it is, the hosts began their 2021 Suzuki Cup campaign on a high note.

The tournament can be watched by Filipino fans on Premier Football on Skycable and Cignal as well as the Tap Go application.