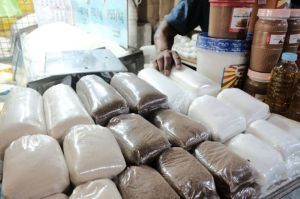 PRECIOUS A vendor stacks sugar in his stall at a public market in Manila on Monday, Aug. 15, 2022. PHOTO BY JOHN RYAN BALDEMOR

ANOTHER official who signed the Sugar Regulatory Administration (SRA) board resolution allowing the importation of 300,000 metric tons (MT) of sugar has resigned.

Beltran signed Sugar Order (SO) 4 as the representative of sugar millers on the board.

He cited his health as the main reason for his decision to quit the board.

Beltran said he first signified his intention to resign last July 1 but was informed on July 29 that he had been retained in a holdover capacity.

Sebastian returned to the board on August 1.

The other signatories were SRA Administrator Hermenegildo Serafica as board vice chairman and Aurelio Gerardo Valderrama Jr., acting board member and the planters' representative.

Beltran welcomed Malacañang's move to investigate the SRA board resolution, saying it will clear his name.

Two congressmen on Monday called for the resignation of the other people who signed SO 4.

Castro and Ferrer said the signatories of the order should resign “out of delicadeza.”

In a video posted on his official Facebook account, the President said the country's present sugar stocks must be used up first before he decides if there is a need to import the commodity.

Malacañang stressed that the President, who is concurrent head of the Agriculture department, did not convene the SRA board to discuss the importation nor did he sign SO 4 that would have given it clearance.

An agricultural group on Monday said the government should conduct an inventory of sugar stocks in warehouses to determine if there is a shortfall.

“This means the volume is three times this year. I am sure we have many stocks. What should be investigated is the spike in the retail price and the stocks in the market,” So said.

He suggested that DA and SRA officials consult with the producers, traders and retailers before deciding on an importation.

“The stocks of sugar are being kept in the warehouses that's why we are surprised on the high retail price of sugar,” So said.

So said he believes that traders are trying to control the release of sugar stocks.

“Within two months, the increase is almost P30 from P70 to P100. Based on their presentation, the retail price of refined sugar should be at P80 per kilo,” he said.