This 2019 file photo shows the island of Boracay.

MANILA, Philippines — With several residents about to be displaced by the ongoing forest land clearing in the prime tourist destination of Boracay, some of them expressed their regret for paying real property taxes over the years.

The Department of Environment and Natural Resources early this month issued notices to vacate properties in areas categorized as forest lands.

At least nine people including Filipinos and expatriates were arrested in Barangay Balabag and were briefly detained for allegedly occupying or building structures in protected forest lands.

They were also charged for violation of Presidential Decree 705 or the Forestry Reform Code of the Philippines, PD 1067 (Philippine Water Code), and the "25+5" or 30-meter beach easement ordinance of Malay, Aklan. In this July 2019 photo, officials marked establishments that are violating the easement rule with red paint marks of 25+5.

The ongoing clearing operations are in compliance with President Rodrigo Duterte’s Executive Order 53, which also created the Boracay Inter-Agency Task Force tasked to reverse the degradation of the island.

This order follows Proclamation No. 1064 signed by then-President Gloria Macapagal-Arroyo in 2006 that classifies the island into 377.68 hectares of reserved forest land for protection purposes and 628.96 hectares of agricultural land as alienable and disposable pursuant to PD 705.

However, several residents who fear the loss of their homes are arguing that they have been residing in the area before the PD was approved.

"It's crazy that people are afraid to speak up about the theft of their ancestral domain land, because they fear their own government,” a Boracay resident for 10 years, who refused to be named said.

Under the Republic Act No. 8371 or the “The Indigenous Peoples’ Rights Act of 1997," ancestral domains "refer to all areas generally belonging to Indigenous Cultural Communities/Indigenous People (ICCs/IPs) comprising lands, inland waters, coastal areas, and natural resources therein, held under a claim of ownership, occupied or possessed by ICCs/IPs."

Section 2 of this law also indicates that the state shall protect the rights of ICCs/IPs to their ancestral domains "to ensure their economic, social and cultural well being and shall recognize the applicability of customary laws governing property rights or relations in determining the ownership and extent of ancestral domain."

The investor added that the residents have followed the government’s process, which includes appealing to the Community Environment and Natural Resources Office, DENR. They also submitted government-issued permits and papers evidencing their tax declarations, but did not get any response.

“Will they all get that refunded? 77 years of tax declaration payments, so they can restart their lives,” the resident said.

Czar Eric Nuque, chief of the National Bureau of Investigation’s Environmental Crime Division earlier said that the law still applies to these areas. He stressed that tax declarations are not enough to claim ownership of the land.

“The Tax declaration is issued for taxation purposes only and should not be considered as title to the property,” the Malay government said.

Asked if the residents will be refunded of their real property tax payments, Nuque said it is not possible.

Nuque said that several persons colluded to issue the tax declaration documents for the forest land.

He added that it is for this reason that the NBI have sued some local government officials for issuing tax declaration illegally.

“Good faith is not a defense in a special law like the Forestry Code,” Nuque added.

The national government has been questioning the local government unit for allowing establishment of properties in areas declared as forest land in the past.

Interior Secretary Eduardo Año then said the LGU should be held accountable for the crisis faced by Boracay.

“The presence of commercial establishments even beyond the prescribed distance from the coastline would not be possible without building and construction permits issued by the LGU. It is their lookout,” the DILG chief said in February 2018.

"Why did the LGU allow establishments to be built in areas classified as forest lands? Why did the Barangay issue the necessary clearances? This we intend to find out and soon," he added.

In May 2018, Environment Secretary Roy Cimatu also issued a warning to LGUs who are violating the law by issuing illegal tax certifications.

A Manila Standard report cited a number of irregularities in the issuance of tax declarations by local government units to individuals who are in “open, continuous, exclusive, adverse and notorious possession” of parcels of forestland.

“The law is clear that no public officer or employee can issue a certificate of real property tax without securing a certification from the Department that the real property to be declared for taxation is alienable and disposable,” Cimatu was quoted by the report as saying.

Lack of response from authorities

Meanwhile, apart from the concerns on the tax payments, residents and business owners in the affected area also complained about the lack of response from the government.

An investor who also refused to be named said they have received a vacate order from the DENR in April 2018, prior to the island’s six-month closure.

“Our lawyer responded to that letter and we have not had any official information since,” the investor said.

He furthered that around September 2018, the NBI asked them to produce all the documents and permits they had.

“Our lawyer wrote a letter along with all the documents and handed it to NBI in manila . They said they will contact us if they need anything else. They never contacted us again, so we assumed it was ok,” the investor shared.

The Supreme Court in October 2008 ruled to classify Boracay as both forest and agricultural land that belongs to the state. This decision also junked the ownership claims of several resort owners.

The next year, the DENR gave residents a powerpoint presentation detailing the guidelines in the issuance of Forest Land Use Agreement for Tourism Purposes (FLAgT) in Boracay forest lands.

FLAgT is defined as “a contract between the DENR and a natural or juridical person authorizing the latter to occupy manage develop subject to government share, any forestland of the public domain for tourism purposes and to undertake any authorized activity therein for a period of 25 and renewable for the same period upon mutual agreement by both parties.”

One of the slides indicated that there is a timeline of around two weeks to issue the FLAgT.

“We applied along with many other people and paid P100,000 but then never heard anything back,” the investor said, despite the government's constant reiteration that it has been sending notices and show cause orders.

The investor said they were also not informed of relocation.

CENRO officer Rhodel Lababit in an interview with Radyo Todo Aklan 88.5 FM’s Todo Latigo last week said that based on the Boracay Action Plan, the local government unit of Malay and provincial government are in charge of the relocation of residents.

“Appropriate cases have been filed against them. This proves that the rule of law is paramount and law enforcement is crucial and non-negotiable,” he said. 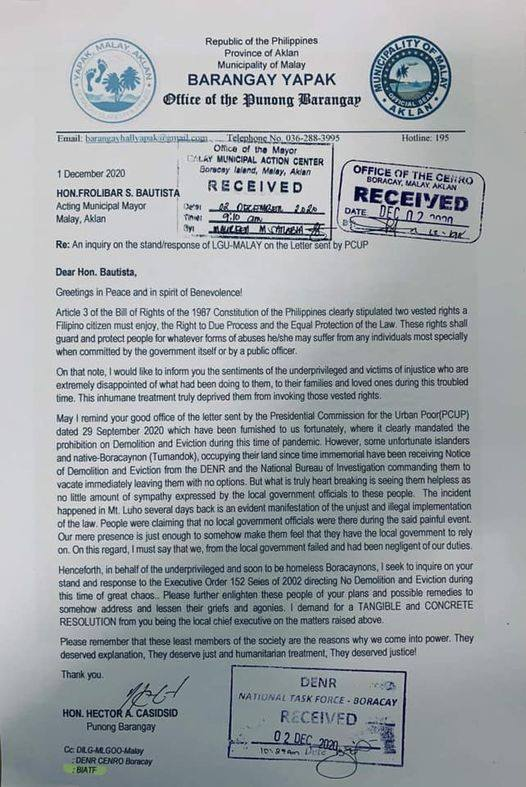 Casidsid cited Presidential Commission for Ureban Poor dated Sept. 29, 2020 furnished to them, which mandated prohibition on demolition and eviction during the pandemic.

“Please further enlighten these people of your plans and possible remedits to address and lessen their frieds and agonies. I demand for a tangible and concrete resolution from you being the local chief executive on the matters raised," the barangay captain wrote.

The DENR chief last week said the BIATF has yet to discuss the relocation of the affected residents.

“While we would would like to see for ourselves the movement on this, we have yet to discuss on what to do with these people who are required to vacate their respective establishments,” he said.

Cimatu during the meeting with the BIATF then suggested to delay the demolition, while also citing the pandemic. He said the DENR should first determine where the residents must be relocated.