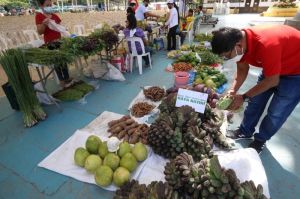 FRESH FROM BULACAN Farmers from Bulacan are given the chance to sell fresh fruits and vegetables at a covered court in Quezon City Memorial Circle on Saturday morning, Nov. 20, 2011. The Bagsakan offers seasonal vegetables and fruits including eggplant, ampalaya, string beans, sweet potato, cassava, pomelo and saba, among others. PHOTO BY RENE H. DILAN

THE food crisis that we have been experiencing here in the Philippines for months and spectacularly highlighted recently by the shortage of sugar is part of what major institutions are now calling a global food crisis. Unfortunately, even though it is a global problem, which makes many of the factors contributing to it beyond any one government's control, it is up to individual countries to solve it for themselves.

We can lament factors such as the war in Ukraine, persistent supply chain bottlenecks, and high fuel prices that adversely affect the Philippines' food security and well-being, but the only response we can make is to work on protecting the Philippines from these external factors, rather than waiting in vain for someone else to solve them.

A commentary published this week by the Manila-based Asian Development Bank (ADB) in an indirect way provides some useful advice to policymakers about how that goal can be achieved. The main point of the article was to highlight the ways in which the ADB is helping countries in the region to address the food crisis, but in detailing those provides a number of useful policy directions that can and should be implemented, whether a country seeks outside assistance or not.

The most important point is that policies to address the food crisis require a balance of short-term and long-term measures. To provide some sense of what problems those measures should address, the ADB noted that the Philippines is among the countries in Asia and the Pacific that are most vulnerable to climate change effects, while at the same time being heavily import-dependent for food supply.

In this context, we could characterize short-term measures as the things the government is already doing, while the long-term measures are initiatives that should be pursued. Some examples of short-term measures in connection with the recent sugar supply crisis include tracking down and relieving supply bottlenecks — particularly those that have been caused intentionally by greedy speculators — assessing supply needs and importing as needed to make up for the immediate shortfall, and imposing price controls to relieve some of the food cost burden on consumers.

Without the long-term measures, however, those short-term actions will have limited positive impact, and will have to be continually repeated. Long-term measures that we have called for in the recent past include such things as ratification of the Regional Comprehensive Economic Partnership, which will expand and lower the cost of two-way trade in many goods, particularly agricultural commodities; increasing the budget and technical capacity for agricultural research and development in order to improve productivity and diversify the agricultural sector; creation of the Department of Water Resource1s to better manage water supplies, of which agriculture is the biggest user; and passage of the Land Use Act, which will provide better protection and more rational use of agricultural lands.

The second important point made by the ADB is that whatever measures are employed to address the food crisis, they should prioritize climate resilience, not only to mitigate and adapt to climate change but to take advantage of the growing number of economic opportunities climate change management directly and indirectly provides. Severe drought in many parts of the world have constrained food supplies, and it is an unhappy coincidence that at this moment, large agricultural areas of Northern and Central Luzon are grappling with the aftermath of a strong tropical storm to remind us of the perils of a rapidly changing climate. We cannot control the weather, but what we can do is to improve our response to its effects on food security in the short term, and minimize harm over the long term. Useful initiatives in this respect include the ones mentioned above but also, for example, improving protection of coastal and mountain lands, which provide natural protection against flooding and landslides.

For the sake of economic prosperity and the simple health and well-being of the Filipino people, the country should strive to achieve food security that is assured no matter what Mother Earth or geopolitics throws at us. The government should welcome any guidance toward achieving that goal, and make implementation of the steps needed to make it a top priority.