BARMM governors all out for Marcos 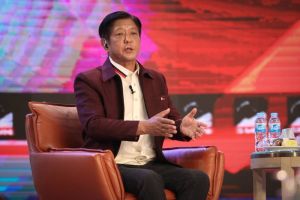 GOVERNORS of the Bangsamoro Autonomous Region in Muslim Mindanao (BARMM) pledged to deliver 70 percent of the votes in the May 9, 2022 elections for former senator Ferdinand “Bongbong” Marcos Jr.

The commitment was made during their recent meeting with Marcos in his campaign headquarters in Mandaluyong City for the consolidation of command votes for his tandem with Davao City Mayor Sara Duterte-Carpio.

There are 2.1 million registered voters in BARMM, and Sultan Kudarat Gov. Suharto Mangudadatu predicted that Marcos could get “70 percent” of the votes.

Mangudadatu called on all local officials who support Marcos not to be complacent and protect the votes cast by their constituents and make sure that they are counted on May 9.

Mangudadatu said that many more local officials from Mindanao will express support for Marcos' candidacy.

Tan has 15 unopposed mayors running under him from the 19 municipalities in Sulu.

“This is the right time na lumabas siya at magbigay ng suporta dahil magkaibigan naman talaga sila ni BBM (that we come out and give our support because we are all really friends with BBM),” Mangudadatu said.

Mangudadatu said the elections are different from 2016 because President Rodrigo Duterte this time did not endorse any candidate, “so all local officials in Mindanao are free to give support to the candidates they want to help.”

“Noong 2016 talagang may pressure from [then-President Benigno “Noynoy” Aquino 3rd] at kahit mga PNP (Philippine National Police) noon. Pero ngayon, hindi na sila makakaporma (In 2016, there was pressure coming from then-president Aquino and even from the PNP. But now, they can't do that anymore),” he added.

He said they are gradually introducing the correct message regarding the wrong view of some Muslims against martial law declared by former president Ferdinand Marcos.

In April, Marcos also met with 10 governors who also expressed support for his candidacy.

Narvacan, Ilocos Sur Mayor Chavit Singson, who was present during the Sunday meeting, said 90 percent or 73 of the 81 governors in the country pledged to support Marcos.

Singson, also League of Municipalities of the Philippines president, called on the governors to work doubly hard to make sure that Marcos would be the first “majority President” since the multi-party system was implemented in the country.

Another boost to Marcos' bid came from the dominant local political party in the vote-rich province of Cebu.

Marcos and running mate Davao City Mayor Sara Duterte-Carpio signed an agreement between the UniTeam and One Cebu Party, led by Cebu Gov. Gwendolyn Garcia, during the party's general assembly in Cebu City.

“One Cebu Party has the honor of announcing its decision to endorse the presidential bid of former senator Ferdinand 'Bongbong' Marcos Jr.,” Garcia said in a statement.

She said that the decision to endorse Marcos “follows weeks of extensive consultations and discussions with provincial, municipal and barangay (village) leaders” across the province.”

“We considered the differing opinions of party leaders advocating the causes of different presidential candidates, and have determined that the unity and strength of One Cebu, its ability to serve its constituents in the province of Cebu, and ultimately, the interests of the Cebuanos are best served if we unite behind the leadership of BBM as President and, as we earlier announced, Mayor Sara Duterte as Vice President,” she added.

In the first agreement, One Cebu and UniTeam said they “have a shared vision that will guide and lead the nation in the goal to achieve sustainable growth and development of Cebu and the rest of the regions in the country.”

“One Cebu and UniTeam are cognizant of the fulfillment of the shared vision through unity among political organizations,” the coalition agreement said.

“In view of the shared objectives of One Cebu and UniTeam, both parties have also agreed to form a political alliance that will pave the way for further realizing the advocacies of both parties through provision of mutual support,” it added.

As a show of mutual support, the UniTeam will “give their full and unqualified support for One Cebu's candidates for governor, Gwendolyn Garcia, vice governor Dr. Maria Theresa Heyrosa and all candidates in Cebu under the banner of One Cebu as well as candidates that are allied with One Cebu.”

“The mayors of the cities of Cebu, Mandaue, Lapu-Lapu and Talisay, respectively, subscribe to the ideals of One Cebu and join in One Cebu's desire to forge alliances for a united and common voice to push forward the development of Cebu as one Island,” the second alliance agreement said.

Garcia is the newest provincial leader to endorse Marcos.

On Sunday, Marcos met with a second group of 15 governors who have also decided to support him.