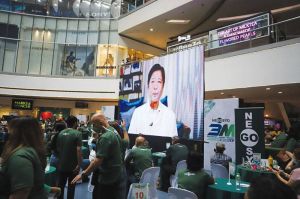 Speaking at the launch of the expanded entrepreneurship mentoring program 3M (Mentorship, Money and Market) on Wheels (3MOW) at The Block, SM City North mall, Concepcion said the support for micro, small and medium enterprises (MSMEs) will continue at a “faster phase with great and more support from the Marcos administration.”

The Go Negosyo founder told thousands of future and present entrepreneurs to avail of the free mentorship.

In his video message, Marcos greeted Concepcion whose launch of the program coincided with his birthday.

“Typical of my friend, Joey Concepcion, what he has done to celebrate his birthday is launch this new entrepreneurship program that is 3M on Wheels,” Marcos said.

Marcos said there is much more that can be done to help the country's small businessmen.

“The MSMEs right now are slowly coming back but still need as much help as we can give them. I really hope that in the next few years, we will be able to come into partnership and do what we can in what you have been advocating for so many years,” Marcos said.

Concepcion said the 3MOW program reflects the wider scope of mentoring it will now be offering to aspiring entrepreneurs.

Concepcion kept mum when asked by The Manila Times on the sidelines if he was offered by the president-elect to stay in his current post.

Concepcion was joined by Quezon City Mayor Maria Josefina “Joy” Belmonte who took pride in her administration's initiatives to help MSMEs such as digitalizing business registration processes, as well as the granting P1 million in startup capital to small businesses.

She said her administration has come up with several programs that would make transacting faster and easier as she assured that so-called fixers were a “thing of the past” at the City Hall.

“In Quezon City, it's now easy,” said Belmonte as she encouraged those present to try their small businesses in the city.

“All three form the foundation of Go Negosyo's mission to promote entrepreneurship among Filipinos,” he said

The program introduces attendees to different facets that are essential to success in entrepreneurship, namely access to capacity-building, financial assistance and market opportunities.

On Saturday, Go Negosyo Mentors on site provided one-on-one coaching and shared their own experiences in business. There were also Money and Market Booths to introduce entrepreneurs to facilities for small-business lending.

Specialists in different marketing channels were on hand to introduce solutions that covered everything from establishing physical stores, digital platforms, logistics solutions to digital payment platforms.

To assist the entrepreneurs in their regulatory affairs, government agencies were on hand to answer questions on documentation, certifications and applications.

3M on Wheels' predecessor Mentor Me on Wheels (MMOW) was started in 2018 and was inspired by the growing number of Filipinos turning to entrepreneurship to lift themselves out of poverty, Concepcion said.

“Thanks to the successful businessmen and entrepreneurs who generously gave of their time and knowledge, and to the finance institutions and enterprise solutions providers who have been with us through the years, we were able to scale MMOW into a nationwide program, and now expand the scope of our program,” Concepcion said.

3M on Wheels is expected to roll out to other urban areas across the Philippines, Go Negosyo said.