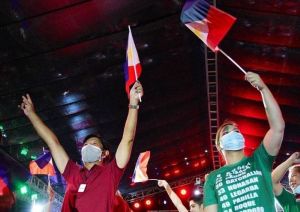 (UPDATE) THE Senate and the House of Representatives begin canvassing the votes for president and vice president today, May 24, and the winners are expected to be proclaimed tomorrow.

On the cusp of being proclaimed as the country's 17th president is former senator Ferdinand “Bongbong” Marcos Jr., who will assume the position his father and namesake was elected to in 1965.

Convening as the National Board of Canvassers (NBOC), the Senate and House are assigned the task of tallying the votes and proclaiming the winners.

Senate Majority Leader Juan Miguel “Migz” Zubiri said in a press briefing on Monday the canvassing starts at 10 a.m. If the NBOC does not finish the count by 10 p.m., it will resume at 10 a.m. the following day until all certificates of canvass (COCs) are tallied.

“We are looking at two days. We don't really see too many problems that may arise [during the canvassing],” Zubiri said.

He said the canvassers might spend no more than 5 minutes on a COC, so he expects the process to be quick.

“But we will entertain all objections. We will answer them. [However,] if we can finish it in two days, I will be very appreciative of that,” Zubiri said.

He said the canvassing has to be finished as soon as possible because there are other important matters the Senate has to attend to before it adjourns sine die on June 3.

He said Marcos and Duterte-Carpio have been advised to attend the canvassing so they could be proclaimed promptly.

On Monday, the Senate adopted Senate Concurrent Resolution 18 which directs Congress to hold a joint session for the canvassing and the proclamation of the new president and vice president.

The COCs and accompanying election returns, which by law have to be transmitted first to the Senate, were transferred on Sunday night to the House's plenary hall at Batasang Pambansa, Quezon City, in 11 military armored trucks escorted by two armored personnel carriers.

The remaining certificates will be brought to the Batasan before the counting starts.

The canvassing will proceed despite unresolved petitions before the Supreme Court challenging the legality of Marcos' candidacy.

Drilon, however, believes the Supreme Court will respect the Congress as a co-equal branch and will not issue a restraining order to stop Congress from performing its constitutional duty.

The court “will not create that kind of situation where the Congress will defy them,” he said.

Once the winners are proclaimed, the petitions will become moot and academic, he said.

The House on Monday adopted its own resolution to hold a joint session with the Senate for the canvassing.

House Secretary General Mark Llandro Mendoza said the rules for the canvassing will be adopted on Tuesday.

Security at the House has been tightened, with about 150 police officers assigned to the Batasan.

He told reporters on Monday he is not ruling out the possibility of rallies outside Batasan organized by groups who have yet to accept the results of the elections.

Danao said the officers have been reminded to be tolerant when dealing with demonstrators.

‘We will go far together’

President swears in members of Cabinet

‘We will go far together’

PRESIDENT Ferdinand “Bongbong” Marcos Jr. called on Filipinos not to dwell on the past as …