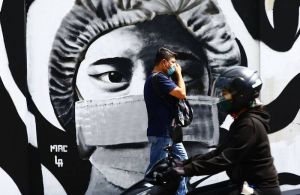 A man wearing a mask walks past a mural in Paco, Manila, on 14 May 2022. PHOTO by MIKE ALQUINTO

“We have already made economic headways, and we should not allow them to be brought to naught. This is why I am urging everyone to take part in preventing another surge that could block our way to economic recovery,” Marcos said in a statement.

“We have to wear face masks and comply with other health standards to ensure our safety and that of our loved ones,” he added.

The incoming president issued the statement amid fears of a possible Covid-19 surge by August.

Marcos also called on the public to avail of booster shots being offered by the government, noting that waning immunity provided by the primary shots could make them vulnerable to Omicron and other highly transmissible Covid variants.

“With the Covid pandemic still ongoing, different variants may still emerge. And as we have seen, some variants are not as resistant to the first and second doses as others. Hence, there is a need to enhance our immunity by getting booster shots. Kailangan ng dagdag na proteksyon (We need extra protection),” Marcos said.

The Department of Health (DoH) reported that the average number of new cases daily in the country rose to 270 from 182 per day last week.

The government has also recorded a slightly higher reproduction number of 1.59, from last week's 1.29.

Reproduction rate refers to the number of people infected by one case. A reproduction number that is below 1 indicates that the transmission of the virus is slowing down.

On Thursday the DoH recorded 425 new Covid-19 infections, the highest daily number of new infections in over two months since 690 logged on April 3.

The new cases bring the nationwide caseload to 3,694,529, while the country's active case count also continues to increase, reaching 3,462 on Thursday from 3,211 on Wednesday.

The Philippines is now experiencing a “minor surge” after it reported 539 cases on Friday, according to independent pandemic tracker OCTA Research.

But the DoH said that the increase is not indicative of a surge yet, as it was not as fast as those previously recorded.

OCTA Research senior fellow Dr. Guido David said with the current rate, it is possible for the country to experience 800 to 1,200 cases per day by the end of the month or early next month.

“Two weeks from now, it is possible that we may see 500 cases per day in the NCR and 1,000 cases in the entire Philippines,” David told The Manila Times.

He warned that cases are now increasing in the Calabarzon (Cavite, Laguna, Batangas, Rizal and Quezon), Western Visayas and Benguet.

David attributed the increase to the presence of the subvariants of the Omicron variant such as the BA.2.12.1, BA.4 and the BA.5.

“The threat is not as big as what we saw in the past… that is why the government retained Alert Level 1, and we do foresee a lockdown anytime soon,” David said.

Health Undersecretary Maria Rosario Vergeire, on the other hand, said that the current increase in cases does not fit the definition of a surge.

“The key for us to prevent this from happening is we follow the minimum health standards, isolate immediately and get vaccinated,” Vergeire added.

“Let me be clear though that vaccination, albeit waning immunity, still provides benefits such as zero deaths and reduced severity of infection. Breakthrough infections are mostly mild,” Garin said.

“Few people are obtaining booster shots because they are unaware that without one, they are not fully protected,” she added.

Garin said the term “fully immunized” should now be defined as having received both the primary series and the first booster shot, noting that based on the virus' behavior and its influence on vaccination, it is projected that the primary series will have to be three doses sooner rather than later.

“Vaccination has no overdose. People must understand it,” Garin said.