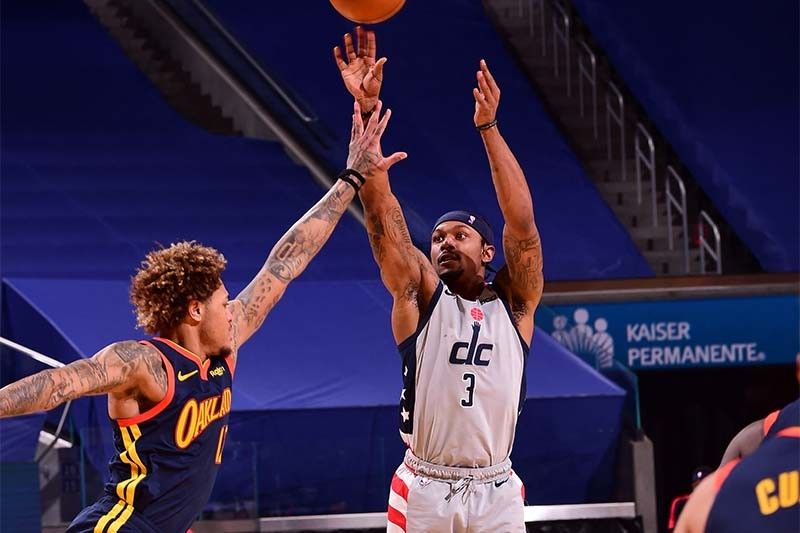 MANILA, Philippines — The Washington Wizards were able to escape with a win against the Golden State Warriors, 110-107, after a clutch play by Bradley Beal at the Chase Center in San Francisco on Friday (Saturday, Manila time).

This erased the efforts of Stephen Curry, who scored four points in a row to give the Warriors their first lead in the final quarter, 107-104, with 19.5 left.

While the Golden State had a chance to take back the lead, a careless turnover from Damion Lee gave the ball back to Washington.

Beal then calmly hit two charities to arrive at the final score with 1.2 remaining.

Curry would then fail to convert on a last-second triple that would've sent it to overtime.

Rui Hachimura paced the Wizards with 22 points while late-game hero Beal had 20.

Russell Westbrook finished with a triple-double with 19 points, 14 assists and 14 rebounds.

Meanwhile, Curry scored 32 points for the Warriors in the losing effort.

Elsewhere, Jayson Tatum erupted for a career-high 53 points to tow the Boston Celtics past the Minnesota Timberwolves in overtime, 145-136.

Tatum's career performance helped the Celtics come back from a 17-point deficit in the third quarter.

Karl-Anthony Towns led the Wolves with 30 points and 12 rebounds.

In another overtime battle, the New York Knicks outlasted the Memphis Grizzlies, 133-129.

The Knicks pulled out all the stops in the extra period after trailing virtually all 48 minutes of regulation.

At one point, the Grizzlies held a 15-point cushion.

RJ Barrett and Immanuel Quickley led six Knicks in double-digit scoring with 20 points each in the win.

For their part, the New Orleans Pelicans stunned the Philadelphia 76ers, 101-94, behind Zion Williamson's 37 points and 15 rebounds.

The Los Angeles Clippers, on the other hand, too their fourth win in a row after winning over the Houston Rockets, 126-109.

The Atlanta Hawks and Indiana Pacers also booked wins against their respective opponents.