MANILA, Philippines — Team Philippines is leaving the 2020 Tokyo Olympics with the best performance ever in history.

The lean but mean contingent of Filipino athletes have rewritten history books after taking the country's first-ever Olympic gold medal with Hidilyn Diaz, and also the largest medal haul for the country ever with the boxing team's three medals (two silvers and a bronze) adding to the collection.

Before Tokyo officially pulls the curtains on the Games of the 32nd Olympiad with the closing ceremonies set Sunday evening, Philstar.com looks back at some of the greatest moments for Team Philippines in Japan. 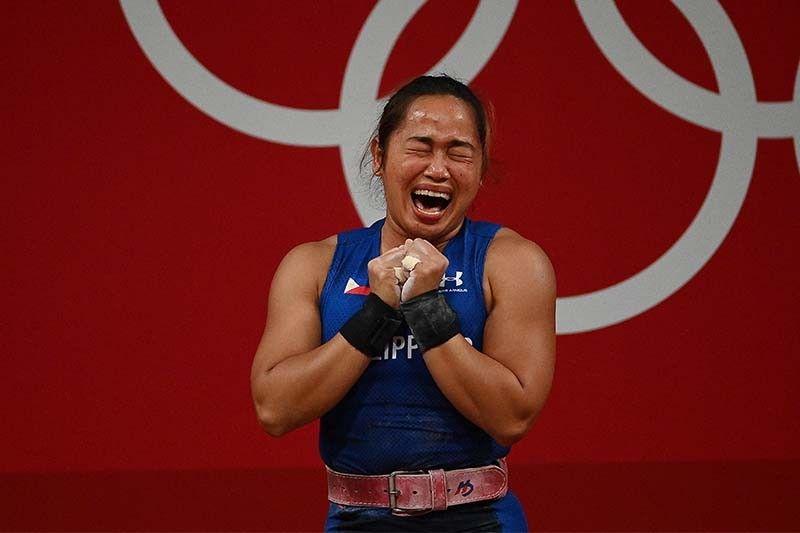 Philippines' Hidilyn Diaz reacts after placing first in the women's 55kg weightlifting competition during the Tokyo 2020 Olympic Games at the Tokyo International Forum in Tokyo on July 26, 2021.

It is a no-brainer that Hidilyn Diaz's record-breaking performance in the women's 55kg easily takes the top prize for the bestest of moments in Tokyo.

Bearing the hopes of a whole nation on her extraordinarily capable shoulders, Diaz quenched the Philippines' thirst for a gold medal in the Olympics that lasted for almost a century.

Setting the Olympic records for clean and jerk (127kg) and total (224kg), Diaz achieved the ultimate goal of every Filipino athlete.

The win sent the whole country into jubilant celebrations, and set the tone for the rest of the Games. Pegged as one of the most promising of teams the country sent to Tokyo, the national boxing team did not disappoint — with all but one of our Filipino pugs coming home with hardware.

Two of the boxers, Carlo Paalam and Nesthy Petecio, even had a chance to give the Philippines two more gold medals with spectacular showings in their final bouts — just falling a hairline short of ruling their respective divisions.

Bronze medalist Eumir Marcial also gave audiences in Tokyo and the rest of the world a number of fights to remember in the stacked and difficult middleweight division.

And though suffering an early exit, Irish Magno also showed a lot of promise.

It's difficult to imagine that all four pugs just made their Olympics debuts in Japan.

A bright future for the Philippine boxing team is nothing but inevitable, then. Philippines' Margielyn Arda Didal reacts after competing in the skateboarding women's street final of the Tokyo 2020 Olympic Games at Ariake Sports Park in Tokyo on July 26, 2021.

Skateboarder Margielyn Didal may not have won any medals in Tokyo, but she surely won the hearts of observers who saw her compete in the women's street skateboarding event.

In a campaign highlighted by smiles and positive vibes, Didal encapsuled the true spirit of the Games where sportsmanship and friendly competition rule.

The Cebuana became a social media sensation with her antics during competition and drew admiration from the countrymen of her fellow competitors.

Even the organizers of the Games had to take notice, giving her vibes a "Margielyn Didal Seal of Approval".

Regardless of the outcome, Didal was truly and wholly herself. Philippines' Ernest John Obiena competes in the men's pole vault final during the Tokyo 2020 Olympic Games at the Olympic Stadium in Tokyo on August 3, 2021.

This as he had to plead his case to have another attempt to clear 5.80m after some technical issues made him unable to have a proper try at the height that would have enabled him to move on in the competition.

Asserting his right to a fair attempt, Obiena stood his ground with competition officials and got another attempt.

While he wouldn't be able to clear the height again and thus ended his hopes for a medal, Obiena's assertiveness to a balanced competition served as inspiration to stand up for what's right and assert ourselves. Cris Nievarez (R) and EJ Obiena both recorded the best finishes in their respective sports in the Philippines' Olympic history.

Cris Nievarez and EJ Obiena were both winners in their own right, despite not making it to the podium of their respective events.

This because they both recorded the best finish of any Filipino athlete in their respective sports in any Olympics before.

Nievarez, who qualified for the quarterfinals in men's single sculls, finished 23rd overall in the Olympics — making him the best rower the country has ever sent into the quadrennial event.

Obiena, for his part, became the first and only Filipino pole vaulter to have reached the final.

Both only in their early 20s, Obiena and Nievarez still have time to break their own records when they try again for Paris 2024. Gymnast darling Carlos Yulo, weightlifter Elreen Ando, and swimmer Luke Gebbie made sure to make their run at the Tokyo Olympics memorable.

This as they rewrote the record books with new bests in the quadrennial event.

And though not enough for a medal, they reiterated their place as some of the best athletes in the country.

Yulo, for his part, shattered the national record for vault with his average score (14.716) and his score in his second vault in the final (14.866).

A source from the Gymnastic Association of the Philippines confirmed it as the highest by any Filipino in the apparatus.

Gebbie, meanwhile, beat his own record for the 100-meter freestyle with 49.64.

He first set the national record at the 2019 FINA World Championships with 49.94.

What was your favorite moment of Tokyo 2020?