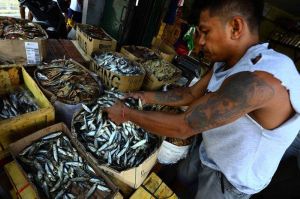 SALTED FAVORITES A vendor sells salted dried fish at a stall in a market in Tondo, Manila on Monday, Aug. 29, 2022. As the price of salt has gone up, consumers are bracing for the possible increase in the prices of salted products such as fish and eggs. PHOTO MIKE ALQUINTO

(UPDATE) THE Bureau of Fisheries and Aquatic Resource1s (BFAR) claimed that it allotted P100 million for salt production last year.

“Last year, BFAR has set in motion a P100-million Development of the Salt Industry Project (DSIP) under the Special Budget Request (SBR) of the Congressional-Introduced Initiative Project,” the bureau said in a statement on Monday.

The BFAR was reacting to the statement of Department of Agriculture Senior Undersecretary Domingo Panganiban that the saltmaking sector has been neglected for 15 years, forcing the government to import salt to make up for the shortfall.

BFAR has confirmed that 93 percent of salt being sold in the market comes from abroad, “an unfortunate circumstance for a country with 36,000 kilometers of shoreline.”

“The project aims to increase salt production and produce excellent quality of salt through enhancement and improvement of the different methods and practices on salt production, and product compliance to food safety standards,” it said.

The project is jointly undertaken by the BFAR Central Office, the National Fisheries Research and Development Institute and concerned BFAR regional offices.

It said its regional office in Ilocos turned over an aluminum truck to the local government unit of Dasol, Pangasinan, and other post-harvest equipment to saltmaking communities.

“A number of factors have contributed to the decline in the production of salt, including low-quality control and stunted product improvement for many years. Limited development has also been noted, including the lack of innovation and interventions, as well as low enterprise and investment opportunities that resulted in the decrease in the production of the said commodity,” it said.

The bureau said saltmakers have failed to adapt to the problems caused by climate change, stringent food safety standards and quality requirements, and tariff reduction.

They also cannot comply with mandatory iodization as required by the “Act for Salt Iodization Nationwide” (ASIN) or Republic Act 8172.

BFAR vowed to collaborate with other agencies like the Departments of Environment and Natural Resource1s, and Trade and Industry (DTI) to improve the country's salt production.

Earlier, Fausto blamed the lack of support from the DTI for the alarming drop in salt production.

The DTI is required to help salt manufacturers upgrade their production techniques through soft loans and financial assistance for acquiring iodization machines.

The ASIN law requires the addition of iodine to salt intended for animal and human consumption in order to eliminate micronutrient malnutrition.

Fausto said his group will lobby in Congress to have the ASIN law repealed.

“I will write a letter addressed to Congress to raise the issues affecting the local salt industry. First, the proposed budget submitted by the DBM (Department of Budget and Management) to Congress failed to allocate even a single cent to the production or development of our salt industry,” he said.

The government should also provide capital to saltmakers, he said.

“Congress should also provide incentives for salt production. While we acknowledge the wisdom of the law, we need to abolish it to give encouragement to local salt producers to develop the shorelines,” he said.

Fausto said salt producers in Cavite, Bulacan, and in Dasol, Bolinao and Sto. Tomas in Pangasinan, and Ilocos Sur have stopped production because of impositions required by the ASIN law.

“Local producers are having difficulties in getting permits to manufacture salt. The concerned LGU (local government unit) will violate the law if it will issue a permit since the law prohibits the production of salt without iodine,” he said.

“At least 50,000 Filipinos were previously employed in salt production,” he added.

He estimated the country's annual salt requirement at 600,000 metric tons.

Fausto noted that salt has 14,000 uses. “I cannot imagine the country without salt,” he said.

He said that exporters are also affected by the ASIN law, since many countries prefer ordinary salt over iodized salt as an ingredient.

“Many of our members are complaining that they stopped exporting as host countries want ordinary salt in their products,” Fausto said.

“We are hopeful that with the President being the Secretary of Agriculture, food production will be given the needed attention,” he said.

“If our basis for importation is because it's cheaper, we should stop altogether our agricultural production. We have been advocating that during the time of harvest, we should not allow any importation,” he said.