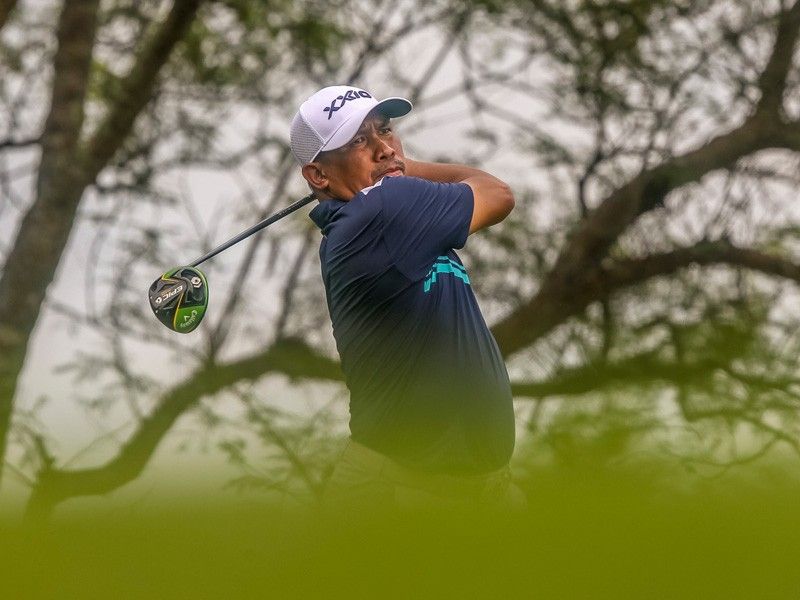 GENERAL TRIAS, Cavite – Pint-sized Joenard Rates sizzled at the finish to upstage the Philippine Golf Tour’s big guns reminiscent of his exploits the last time out, coming away with an eagle-spiked 69 to drive past Michael Bibat for a one-stroke lead in the first round of the ICTSI Eagle Ridge Challenge at the Aoki course here Tuesday.

Rates birdied three of the last five holes at the front to jump from the middle of the pack and into the lead in sun, rain and wind, spiking his 33-36 card with a pitch-in eagle from 150 yards on the par-5 11th and capping with a tap-in birdie on the ninth.

He said he didn’t expect to lead the way he did in the first of two ICTSI Riviera championships that marked PGT’s return after an eight-month break due to pandemic last November but maintained he came into the P2 million event ready and in good form behind a series of practice and workouts.

“I also worked on my stamina since we’re playing sans caddies and under erratic weather conditions. But the rain is part of the game and I really needed to work hard on every hole,” said the 5-foot-3 Rates, looking for his third career win after nipping Finnish Janne Kaske in a playoff to snare the PGT Asia crown at Summit Point in 2018.

But he would need to work doubly hard to foil his pursuers and nail another victory in new normal, and at least atone for his joint fifth finish at Riviera Challenge, as Bibat also birdied his closing hole at ninth to shoot a 70 and Rufino Bayron birdied three holes in his closing frontside to save a 71 for third to make it a crowded leaderboard.

“Given the playing conditions, including wind and rain and pin placements, I’m happy with my game,” said the soft-spoken Bibat, out to snap out of a long title spell in the ICTSI-sponsored circuit after scoring a breakthrough at Palos Verdes in 2013.

Just a stroke off the pace, the former Asian Games bronze medalist said he won’t be going on the attack mode this early, stressing: “I’ll just take it one shot at a time, try to hit the fairways and greens and make the most of my birdie chances.”

Tabuena, who failed to figure in the title chase at Riviera, barely overcame a double-bogey start with a roller-coaster finish of three birdies against two bogeys in the last seven holes at the back, but his 73 still put him within striking distance at joint eighth with Marvin Dumandan.

Alido, who marked his first pro victory with a whopping nine-shot romp at Riviera Championship, blew a one-under card with a bogey-double-bogey finish at the back as he dropped to joint 10th at 74 with Anthony Fernando, Gerald Rosales and Reymon Jaraula.

Amateur Jolo Magcalayo, meanwhile, missed joining the 71 scorers as he bogeyed two of the last three holes at the front and fell to the group of Justin Quiban and Richard Sinfuego at 75 while Que birdied the 17th that hardly checked a skid marred by a double bogey and three bogeys in a nine-hole stretch from No. 8.

But Lascuña and Mondilla will have a lot of catching up to do to make the 40-plus ties cut as the former, who ran away with the first Riviera title, turned in his worst card in years – a birdie-less 80 marred by a quadruple bogey on No. 8. The four-time OOM winner, however, stood at joint 35th.

Mondilla, who ruled the PGT Asia event at Pradera Verde in early 2020, hit two birdies but stumbled with nine bogeys, a double bogey and also an “8” on No. 8 for an 85 and way down at 47th.