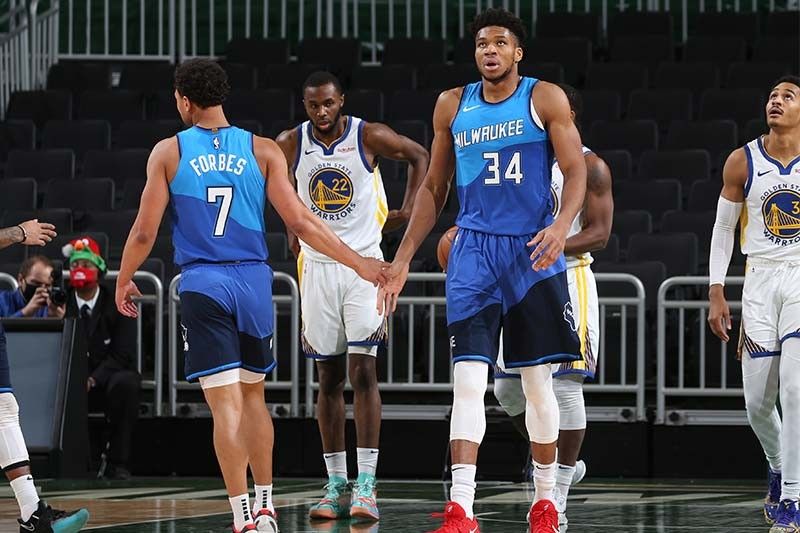 Giannis Antetokounmpo #34 hi-fives Bryn Forbes #7 of the Milwaukee Bucks during the game against the Golden State Warriors on December 25, 2020 at the Fiserv Forum Center in Milwaukee, Wisconsin.
Luisa Morales (Philstar.com) – December 26, 2020 – 2:42pm

MANILA, Philippines — It was a Christmas day blowout in the NBA's five-game Holiday showdown on December 25 (December 26, Manila time), with all games decided by double-digit deficits.

Last season's Eastern Conference Kings Milwaukee Bucks were the biggest winners of the day with a 39-point beatdown of erstwhile contenders Golden State Warriors, 138-99, to send the former champions to a 0-2 start to the season.

Khris Middleton paced the Bucks on offense with a game-high 31 points, five assists and four rebounds.

Reigning MVP finished with a double-double with 15 points and 13 boards in the dominant victory.

Meanwhile, Stephen Curry topscored for the Warriors in the losing effort with 19 markers.

For their part, the Brooklyn Nets also breezed past the Boston Celtics, 123-95, for their second win of the season.

Superstar duo Kyrie Irving and Kevin Durant imposed their will on the Celtics to finish with 37 points and 29 points, respectively in the one-sided affair.

To go along with his 37 markers, Irving also had eight assists and six boards against his former team.

Jaylen Brown was the bright spot for the Celtics with 27 points and eight rebounds.

Defending champions Los Angeles Lakers, on the other hand, bounced back from their opening day loss against the Los Angeles Clippers after a lopsided 138-115 win over the Dallas Mavericks.

In a rematch of last season's second round of the playoffs, Anthony Davis and LeBron James got the best of Dallas' Luka Doncic.

Davis scored a team-high 28 points for the Lakers while James chipped in with a near triple-double of 22 points, 10 assists, and seven assists.

Doncic was the go-to scorer for the Mavs with Kristaps Porzingis unavailable to play with 27 points and seven assists.

Duncan Robinson hit a record-tying seven three pointers in a Christmas day game to lead the Heat with 23 markers in the win.

Goran Dragic chipped in with 18 points, while Bam Adebayo tallied 17.

In the last game of the day, the Clippers fended off the pesky Denver Nuggets, 121-108 to cap off the Holiday hostilities.

Clippers star Kawhi Leonard came out of the game late after absorbing an elbow to the face in the fourth quarter.

Leonard finished with 21 points in 30 minutes of play, only a couple shy of Paul George's team-high contribution of 23 markers.

Nikola Jokic and Jamal Murray paced the Nuggets in the unsuccessful comeback bid against the Clippers with 24 and 23 points, respectively.

Share
Previous NIA: Magat Dam not fully responsible in Cagayan flooding
Next DoH vows Phl will have vaccines that are acceptable to the people; Sinovac to undergo scrutiny