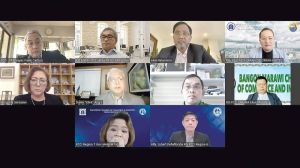 KEY officials of the Philippine Chamber of Commerce and Industry (PCCI) presented a wish list for the government of President-elect Ferdinand “Bongbong” Marcos Jr. that includes prioritizing digitalization and industrialization in agriculture, improving ease of doing business, and strengthening support for micro, small and medium enterprises (MSMEs).

The Manila Times invited the PCCI local chamber network to a roundtable discussion on Friday to submit their list of priorities the Marcos administration must focus on during its first 100 days.

Carbon said the way to do this is through agro-industrialization and promoting agribusiness, particularly among small farmers and fishers.

“It's about time to go agro-industrialization [and move forward] the whole agriculture business sector. From being mere hunters, we should industrialize. We've been like this for the past 50 years. We should be talking digitalization now. We need technological transfer and capitalization,” he said.

Belarmino stressed the need to legislate a national body that will monitor land use “for us to know what are the food produced in our country” and, at the same time, stop the rampant agricultural smuggling, which is one major problem plaguing the country's food security.

Arturo Milan, area vice president for PCCI-Mindanao, pushed for a review of the Agrarian Reform Law that provides for the redistribution of public and private agricultural lands to landless farmers and farmworkers.

“It's unfortunate to see we have vast lands in Mindanao but they're unproductive. Nobody knows how to use it,” Milan said. Farmers badly need technical assistance to utilize idle lands and help increase agricultural production.

Gigi Gamboa-Simbulan, area vice president for PCCI-North Luzon, said the Marcos administration must double its efforts to make local farmers and fishers more competitive by broadening interventions from production to processing and marketing through the value chain system.

“We are primarily agricultural…. Government must help our farmers, fishers and members of the agriculture industry to attain greater competitiveness. This is through increasing productivity and lowering production cost, as well as advancing science and technology. We need to really make agriculture shine,” she said.

During his first 100 days, Gamboa-Simbulan hopes the new president will roll out programs that will enable local food producers to also become competent managers and successful entrepreneurs.

She proposed scholarships in agriculture-related courses to attract the youth to agriculture and change the image of the sector.

To boost the farmers and fishers' competitiveness, Gamboa-Simbulan said they should have easy access to government credit and financing.

She called for a review of the Agri-Agra Law, lamenting that banks have been remiss in lending to the farm sector in the past decades.

“Banks, particularly on LandBank (Land Bank of the Philippines) and DBP (Development Bank of the Philippines), must simplify loan requirements. They should fully comply with the mandated 10-percent financing program. Banks would rather pay the penalty instead of giving it to the farmers because they find agriculture too risky. We have to change our mindset on that because agriculture is our best tool for recovery and food security,” she said.

The Agri-Agra Law (Republic Act 10000) requires banks to allocate at least 25 percent of their outstanding portfolio to agriculture. Of this, 10 percent should be devoted to credit for agrarian reform beneficiaries. However, the law, which was passed during the administration of President Ferdinand E. Marcos Sr. and enacted in 2009, has been yielding to low utilization of the loan funds as banks would rather choose to pay penalties instead.

The agriculture sector needs an estimated P270 billion in loans annually to be able to support facilities, machines and equipment and programs, according to the Department of Agriculture (DA).

“Let us not forget our farmers, the poorest of the poor, who are the ones really entitled to get access for financing,” Gamboa-Simbulan said.

Forming farmers competitively requires a “very competitive” head of the Agriculture department, said Jobert Peñaflorida, PCCI regional governor for Western Visayas. “We look forward to a very competent secretary of the DA, somebody that can ensure food security.”

Food security “should continue to be an important priority,” Peñaflorida said.

The sector contributes about 10 percent to the country's gross domestic product (GDP). Combined with processing (10 percent) and ancillary services (15 percent), however, its total contribution is 35 percent.

During the roundtable, all PCCI officials agreed that more support must be provided for MSMEs across industries, especially during challenging times like the pandemic.

Peñaflorida lauded the Department of Trade and Industry under the leadership of Secretary Ramon Lopez for implementing programs that helped MSMEs survive at the height of the pandemic.

“We're always saying they (farmers) comprise 95 percent of the economy. So let's walk the talk…. I would like to see the next administration giving the same efforts to the MSMEs, especially on financing.

That has helped us get back to our feet but more has to be done with the rising fuel prices and high inflation,” he said.

Peñaflorida said MSMEs should have direct access to capital. “Many MSMEs have no support documents to back it up. Channeling it to conduits would make it more difficult for them to access finance.”

Sarah Deloraya-Mateo, regional governor for PCCI-NCR Central Sector, emphasized the importance of skills development among MSMEs. Government must also provide local employers with more tangible incentives since they find it harder to hire workers because of the mismatch between job skills and qualifications.

Deloraya-Mateo said MSMEs should go through digital transformation to improve their businesses.

The National Capital Region alone had 201,080 MSMEs, according to the Philippine Statistics Authority.

MSMEs make up 99.5 percent of business establishments in the country, provide 63 percent of total employment and contribute about 40 percent to the GDP.