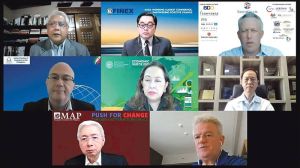 THE next president should continue to implement the reforms started by the Duterte administration and focus on developing the energy, agriculture and education sectors, business groups said on Tuesday.

In a roundtable discussion organized by The Manila Times, local and foreign business groups highlighted the importance of continuity of programs of the current administration to the next.

Finex President Michael Guarin said the key is the continuity of the good programs of the current administration.

“Just because there's a new administration doesn't mean that we have to start from scratch. We know which things, which programs and which initiatives have worked, let's continue to roll them out,” Guarin said.

Davao City Chamber President Maria Lourdes Monteverde shared the sentiment, noting that continuity of good policies instituted is a must.

“For us here in Davao and Mindanao, we would really want all the projects to be pushed through. There will be nothing that can be left behind, especially for infrastructure development, and that for the social and health initiatives that the current administration has already started for Mindanao,” she said.

Guarin highlighted the increase in infrastructure spending that the country saw for the past six years, which he hopes will result in continued growth even with the installation of a new leader.

This was echoed by Italian Chamber Managing Director Lorens Ziller.

“I think the next government should definitely continue the path of building more infrastructure. So, continuing the Build, Build, Build agenda of the current government will also mean additional jobs, that will mean that the country will just become more competitive,” Ziller said.

The program, he added, also gives foreign investors an opportunity, especially through Public-Private Partnership (PPP) projects, to come in and invest in the country.

He, however, cited the need to amend the Right of Way Act.

“That means speeding up digitalization of government processes for more transparency and less red tape, that I think is really needed to further improve the business environment, both domestically and internationally,” he said.

Cebu Chamber of Commerce and Industry Inc. President Kenneth Co said they want the next president to focus on exports and manufacturing in the province again.

Co also expects further improvements in their ports to boost Cebu's competitiveness, as well as more development of their mass transit system.

Aside from the Build, Build, Build, the next administration should also implement the laws that amended the Foreign Investments Act (FIA), Public Services Act (PSA) and Retail Trade Liberalization Act (RTLA).

Republic Act 11595, which amended the RTLA, simplified and eased restrictions for foreign retailers who wish to set up shop in the Philippines while RA 1164 (FIA) eased some restrictions on foreign investments.

RA 11659, which amended the PSA, allowed full ownership of telecommunications, airlines and railways.

BCCP Executive Director Chris Nelson said the implementing rules and regulations of the amendments to the PSA and the FIA should be issued immediately.

“I think we're still waiting for the other two [IRRs] and obviously that's important. Because we know from past experience sometimes, it can take three to four years for [the] implementing rules. And I think there's a degree of impetus,” he added.

During the roundtable discussion, the business groups expressed hope that the next administration will implement reforms that will help improve these sectors.

“If we've properly harnessed the output of the farms and technology is employed for value-added transformation of these farm outputs or marine outputs, then you will spawn a strong manufacturing sector and also spawn an export capability,” MAP President Alfredo Pascual said.

Pascual added that the next administration should ensure food security and food sufficiency and promote the processing of agricultural produce, which then could be shipped to other countries.

Meanwhile, Guarin said education is key to growth as it would have a multiplier effect and positive effect on the other sub-sectors of the economy.

He underscored the shift to clean energy and hopes the next administration can shepherd the transition.

“It will allow us to be closer to what the rest of the world is already heading toward…[and] it will have a direct relationship to…foreign direct investment decisions,” Guarin said.