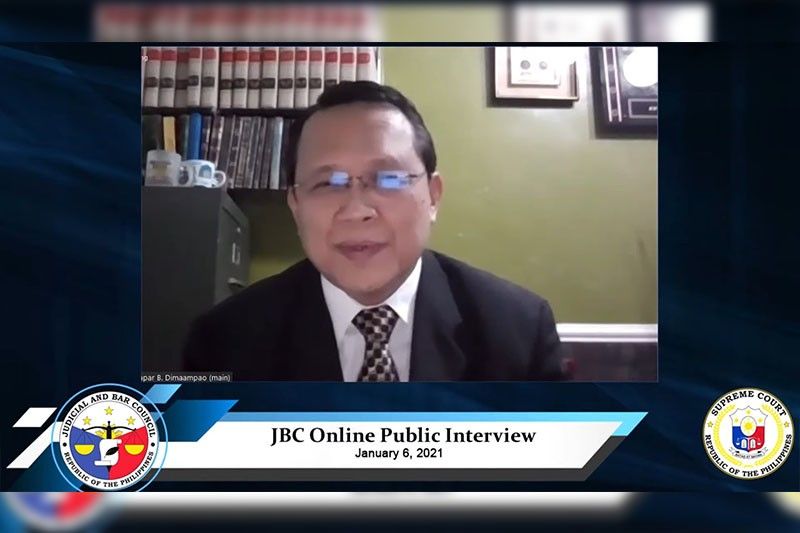 MANILA, Philippines — Court of Appeals Associate Justice Japar Dimaampao, a known Muslim jurist and a magistrate who promised to adhere to “judicial activism,” has been appointed to the Supreme Court.

The SC Public Information Office confirmed President Rodrigo Duterte’s appointment of Dimaampao as the 191st associate justice of the high court. He is taking over the associate justice seat vacated when Chief Justice Alexander Gesmundo assumed the top judge post.

He was a law professor, Bar reviewer and expert in taxation laws. Before joining the appellate court, he was a former prosecutor and judge of the Mandaluyong City regional trial court (RTC).

The new SC justice has consistently been included in shortlists for SC justices in the past years and has long had the support of the Muslim community in the country.

In his public interview with the Judicial and Bar Council in January 2021, he said he applied to the SC 13 times and has been fortunate to be shortlisted 13 times.

If appointed to the SC, Dimaampao said: “I will always uphold the supremacy of the Constitution and I will likewise be guided by the definition of judicial power under Art. VIII Section 1 paragraph 2, which in effect adopts the theory of judicial activism.”

The said provision reads: "Judicial power includes the duty of the courts of justice to settle actual controversies involving rights which are legally demandable and enforceable, and to determine whether or not there has been a grave abuse of discretion amounting to lack or excess of jurisdiction on the part of any branch or instrumentality of the Government."

Dimaampao is joining the SC at a time when the Judiciary’s judicial activism has been largely discussed in JBC interviews and even at budget hearings.

The SC has recently revived its Committee on Human Rights that is looking into progressive groups’ reports on killings and threats against lawyers in the past decade.

At the House of Representatives, lawmakers also praised the SC for its judicial activism as seen in its promulgation of rules on the use of body cameras in implementation of warrants, the clipping of power of judges to authorize them to only issue search warrants within their judicial region, and Chief Justice Alexander Gesmundo’s directive to resolve cases within two years

For the Bangsamoro people

He is only the second Filipino Muslim to join the high court, following the appointment of the late Associate Justice Abdulwahid Bidin in 1987.

In 2019, the Bangsamoro Autonomous Region in Muslim Mindanao issued a resolution endorsing Dimaampao to be appointed to the high court.

They said that Dimaampao holds the honor of being one of the youngest justices to the appointed at the Court of Appeals at the age of 40. He is also recognized for being the “first and only Muslim Senior State Prosecutor, Bar Reviewer, Professor of Law of the University of Santo Tomas and a Member of the University of the Philippines Law Center, Committee on Bar Examinations in Commercial Law and Taxation.”

They then called on the designation of Dimaampao to the SC so he can “continue the legacy of being an inspiration and an example for the Bangsamoro People, especially in the recognition of the aspirations of Muslim Filipinos, and the legitimacy of the cause of the Bangsamoro People.”

Duterte is also set to appoint a new magistrate at the SC following the early retirement of Associate Justice Edgardo delos Santos in June.

The Judicial and Bar Council is also expected to open applications for the high court for the mandatory retirement of Associate Justice Rosmari Carandang in January 2022.