Dylan Cozens of Whitehorse had a hat trick and three assists for the host country against an opponent ravaged by the COVID-19 virus. 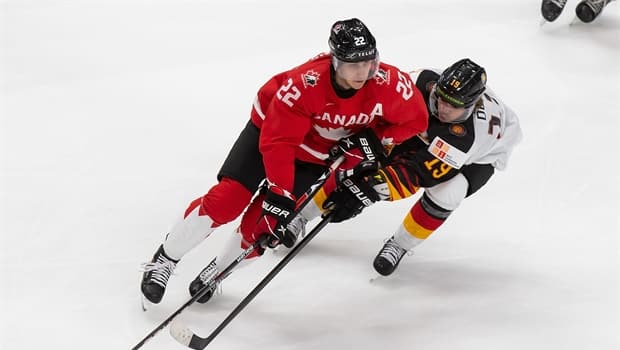 Dylan Cozens had three goals and three assists to lead Canada’s scoring in their 16-2 victory over a short-handed Germany squad.0:29

John Peterka and Florian Elias countered for the Germans in Rogers Place devoid of spectators because of the COVID-19 pandemic.

Nine German players were isolating in hotel rooms Saturday because of positive tests for the virus upon arrival in Edmonton.

Germany played 14 skaters — nine forwards and five defencemen — for a second game in as many days after falling 5-3 to Finland on Christmas Day.

The Germans couldn’t run anything resembling a real practice until the day before their first game.

“We weren’t too focused on the score,” Cozens said. “We were just focused on playing the right way.

“It’s our first game of the tournament. We’ve got to establish our good habits

“It’s a tough spot they’re in. They’re down a lot of numbers and just coming out of quarantine. It does suck for them for sure.”

Canada faces Slovakia (1-0) in Pool A on Sunday.

Tiefensee gave up four goals on 11 shots following a 45-save outing versus Finland the previous day. 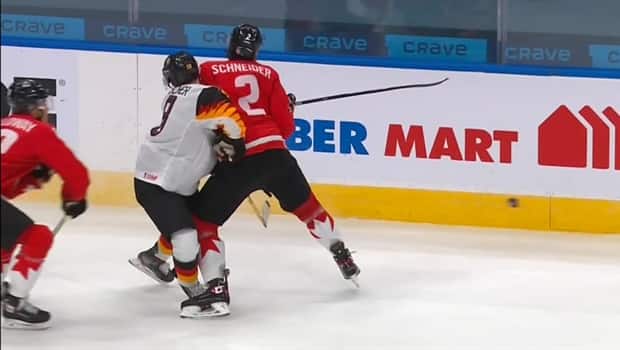 Canadian Braden Schneider was given a game misconduct for this hit to the head of Germany forward Jan-Luca Schumacher.0:54

Canada’s Braden Schneider was ejected before the game was nine minutes old.

Sweden opened Pool B with a 7-1 thumping of the on Saturday.

The top four teams in each pool advance to the Jan. 2 quarterfinals, followed by semifinals Jan. 4 and the medal games Jan. 5.

Canada’s tournament prep was interrupted by a 14-day quarantine midway through selection camp because a pair of players tested positive for COVID-19. 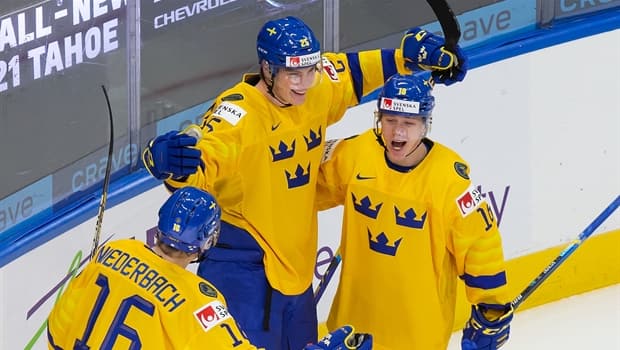 Elmer Soberblom showed off his hands in tight as he went between-the-legs to extend Sweden’s lead against the Czech Republic.0:29

Before Saturday’s opener, the majority of the Canadian players hadn’t played a meaningful game in months because of the pandemic.

Up 4-1 by the end of the first period, it became clear the game would serve as a rust-shedder for Canada and an ordeal for the Germans.

“We’re not a team who played 15 games together or 30 games before the camp,” Tourigny said.

“Most of those guys have four intrasquad games and one pre-competition and one competition game. We need to get better every day.

“It could have been two hundred to one. It’s not about that. It was about us playing and preparing our team and our play to move forward in the tournament.”

“We have no time to waste.”

“This happens when you are not mentally and physically ready and able to play on this kind of level with this intensity and speed,” German head coach Tobias Abstreiter said.

“We had no tools, no battle-level, nothing to compete against Canada’s strong game. We gave up in a way and this is what I cannot accept.”

Share
Previous What Canadians need to know about the coronavirus variant in Ontario
Next P5.4M shabu nakumpiska sa Angeles City