Canceled debate with Carpio not equivalent to PRRD being coward 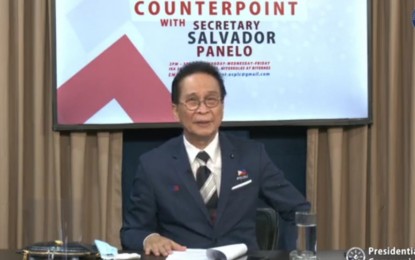 This, after the hashtag #DuterteDuwag (Duterte is a coward) trended on Twitter on Friday after Presidential Spokesperson Harry Roque announced the Chief Executive’s decision not to pursue a debate with Carpio on issues concerning the disputed West Philippine Sea (WPS).

During his commentary show “Counterpoint,” Panelo said it is already useless for Duterte to debate with Carpio since the Chief Executive already made a “clear” stance on the Philippines’ long-standing disputes with China in WPS.

Panelo added that the ongoing word war between Duterte and Carpio should be considered as a “debate” since they are giving different positions on WPS issue.

“Noong sinabi ni Presidente, iba ang aking naiisip. Hindi naghahamon si Presidente ng debate. Bakit pa siya maghahamon ng debate? Eh nagdedebate na nga in a way (When the President called for a debate, I think differently. The President does not want a debate. Why would he ask for a debate? There’s already a debate [going on between him and Carpio]),” he said.

It was Duterte who first dared Carpio on Wednesday to debate with him on territorial issues concerning WPS and Carpio accepted his challenge.

However, Roque announced Friday that Duterte would no longer engage in a debate with Carpio following the advice of his Cabinet.

Panelo said the debate, should it push through, would only give Carpio a “media mileage.”

Duterte withdrew from his debate challenge because his Cabinet told him that it will not benefit the country and it might affect the government’s existing policies on WPS.

The President also designated Roque to hold a debate with Carpio on his behalf.

Carpio, however, rejected the latest challenge, saying it would be “pointless” to debate with Roque.

Panelo said he may debate with Carpio, should the latter accept his challenge.

He made the offer, as he believed that Carpio is “no match” for Duterte because they do not have the “same rank, same intelligence, and same status.”

“Kung gusto mo tayo na lang magdebate (If you want I can debate with you).” (PNA)