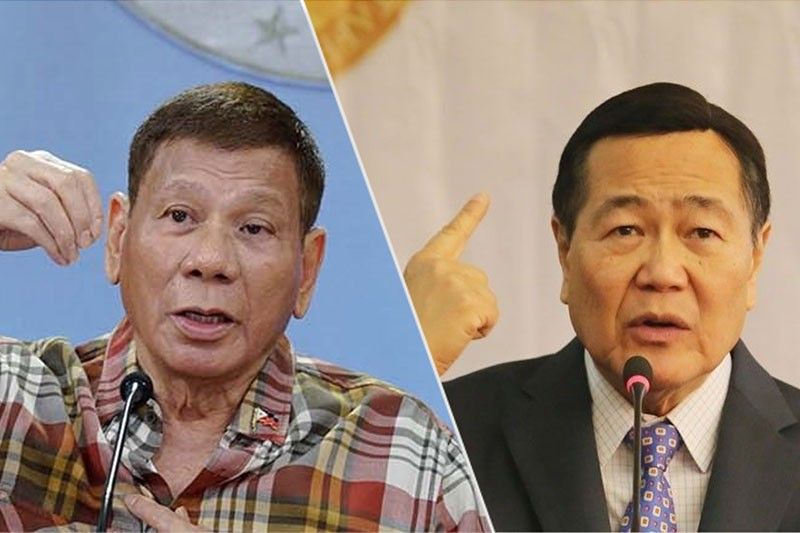 In a Change.org petition that has garnered close to 800 signatures as of this writing, Carpio called on Duterte to rescind the following statements:

This comes after the National Task Force for the West Philippine Sea on Wednesday flagged the presence of 287 Chinese maritime militia ships near the Municipality of Kalayaan in Palawan, both within and outside the Philippine exclusive economic zone. Foreign Affairs Secretary Teodoro Locsin Jr. on Thursday ordered another round of diplomatic protests in response to the report.

The ships were spotted less than two months after the task force first reported the presence of 220 Chinese ships at Julian Felipe Reef.

In a pretaped address aired Friday, Duterte in response to the new development said Philippine ships "will not move an inch backward."

But he again derided the arbitral ruling that invalidated China's expansive nine-dash line claim as "just a piece of paper." The president also belittled the United Nations, something he does often, calling the organization useless.

Duterte further reiterated his "utang na loob" or indebtedness to China and his refusal to go to war with the regional power over its outized presence in the West Philippine Sea.

Critics of government policy in the West Philippine Sea, including Carpio, have stressed that war is not the only way to assert sovereignty in Philippine waters.

Sen. Risa Hontiveros earlier Friday urged Malacañang to retract its "defeatist" statements on the West Philippine Sea. She also called for better coordination of positions and actions on the issue among government agencies.

Share
Previous Desperate to see his dying mom, a bus driver put out a plea. The response bowled him over
Next DOH: Safeguards in place for implementation of stricter GCQ in ‘NCR Plus’