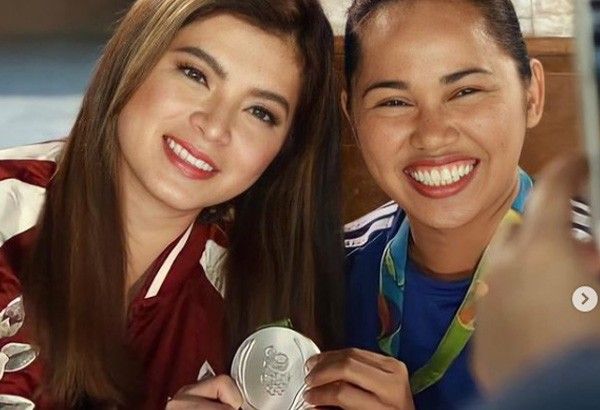 Hidilyn ruled the Women's 55kg event setting an Olympic record of 224kg in total. World Champion Quiyun Liao of China fell just a kilogram short of the Filipina with 223kg.

“OLYMPIC GOLD. Our Kapatid @hidilyndiaz bags the first ever Olympic gold medal for the Philippines. A strong woman who has endured so much to represent our country well and make us proud. Mabuti kang tao at napaka sipag at tiyaga mo, kaya Ikaw ay pinagpapala. Mahal ka namin! Thank you for bringing us so much hope. Nakakaiyak. MABUHAY KA!” Iza wrote.

“The mighty @hidilyndiaz wins the olympic gold in Tokyo!!” he wrote.

Kapamilya actress Angel Locsin posted a photo of her and Hidilyn on Instagram.

Broadway star Lea Salonga said on Twitter that the most emotional part of Hidilyn’s win is the “Lupang Hinirang” being played in the international arena.

“The most emotional part was hearing our National Anthem being played. Nic and I stood, hands on hearts, and cried. Mabuhay ka, @Diaz_Hidilyn,” she wrote.

The most emotional part was hearing our National Anthem being played. Nic and I stood, hands on hearts, and cried. Mabuhay ka, @Diaz_Hidilyn! pic.twitter.com/hUQdY4obeM