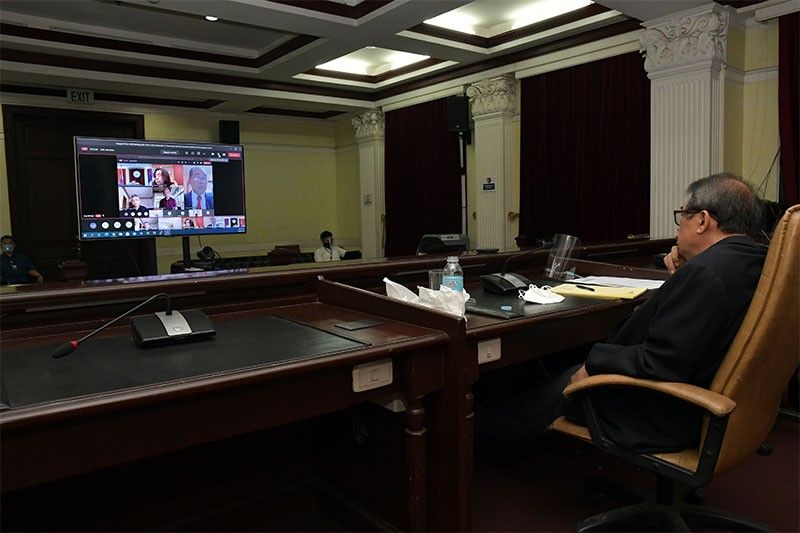 MANILA, Philippines — Supreme Court justices led by top judge Alexander Gesmundo on Tuesday met with lower court judges and personnel and assured them that the Supreme Court is working to address their concerns brought about by the COVID-19 pandemic.

The SC Public Information Office said Chief Justice Alexander Gesmundo and other magistrates “got first-hand knowledge on the immediate health and work concerns of lower court judges and personnel” during their first virtual town hall meeting.

“This is the first time the SC magistrates met with all 2000 judges and some court personnel collegially and online, using the live event feature of the Judiciary 365 platform,” the SC PIO added.

During the meeting, Gesmundo has assured Judiciary personnel that "the Court En Banc will study the issues you raised." He added that the SC “will pass and approve appropriate issuances in due time”

Gesmundo is taking over the reins of the Judiciary following the early retirement of Chief Justice Diosdado Peralta. The new chief justice took his oath on February 5.

Among his first directives as head of the Judiciary is ordering the physical closure of courts in all areas under Modified Enhanced Community Quarantine, including in the National Capital Judicial Region, until April 18.

Under Gesmundo’s Administrative Order 21-2021, courts in MECQ areas shall continue to operate through videoconferencing on cases, urgent or not, in the said period.

The SC also moved to conduct the next oral arguments on the 37 consolidated petitions against the Anti-Terrorism Act of 2020 through videoconferencing. Debates had been delayed due to the community quarantine status

But courts outside the MECQ areas are also being forced to be closed temporarily due to COVID-19 threat. In two days this week, more than 20 courts across the country had to be physically closed for days due to potential exposure to a confirmed coronavirus case or disinfection.

The SC PIO also said that during the town hall meeting, the SC also updated the participants on the progress of the Judiciary’s vaccination plan.

The high court announced last week that the nearly 30,000 employees of Judiciary are now included in the A4 category (frontline personnel in essential sectors) of the government’s priority list for vaccination.

Frontline personnel is currently on the fourth spot on the priority list for vaccination, following medical frontline, senior citizens and persons with comorbidities.

“Since the NTF has granted the inclusion of judiciary employees in the priority population group A4 (category A4), they are highly encouraged to immediately register with the [Local Government Units] of their residence or workplace,” the SC PIO added.