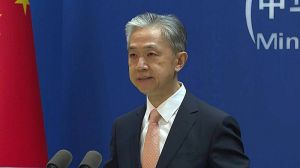 CHINA looks forward to continuing talks with the Philippine government under the administration of President-elect Ferdinand “Bongbong” Marcos Jr. on the joint oil and gas exploration in the West Philippine Sea (WPS), a Foreign Ministry official said.

In a press conference in Beijing on Thursday, Beijing Foreign Ministry Spokesman Wang Wenbin said : “China stands ready to work in concert with the new Philippine government to advance negotiations on joint development and strive to take early substantive steps so as to deliver tangible benefits to both countries and peoples.”

The Chinese Foreign Ministry spokesman made the remark following a revelation by Foreign Affairs Secretary Teodoro Locsin Jr. that the Philippines-China discussion for a joint oil exploration in the West Philippine Sea (WPS) has been terminated on President Rodrigo Duterte's order.

In his speech during the Department of Foreign Affairs' (DFA) Foundation Day Locsin said: “The President had spoken. I carried out his instructions to the letter: Oil and gas discussions are terminated completely. Nothing is pending; everything is over.”

He said that both sides tried to negotiate for three years and got as far as constitutionally possible. However, another step forward would have risked a “constitutional crisis”.

“That explains the sudden pull-back on my part which unraveled three years of sincere hard work on the part of Wang Yi and me. We had both tried to go as far as we could — without renouncing China's aspiration on his part; and constitutional limitations on my part. I shut down the shop completely,” Locsin added.

But Foreign Ministry Spokesperson Wang Wenbin cited a memorandum of understanding (MOU) which China and the Philippines signed in November 2018 to embark on negotiations “and made important progress within this framework.”

The Chinese official hinted that the oil and gas discussion would continue under the incoming Marcos administration unless the pact is revoked.