CHR: Arrests on Int’l Human Rights Day a ’cause for concern’ 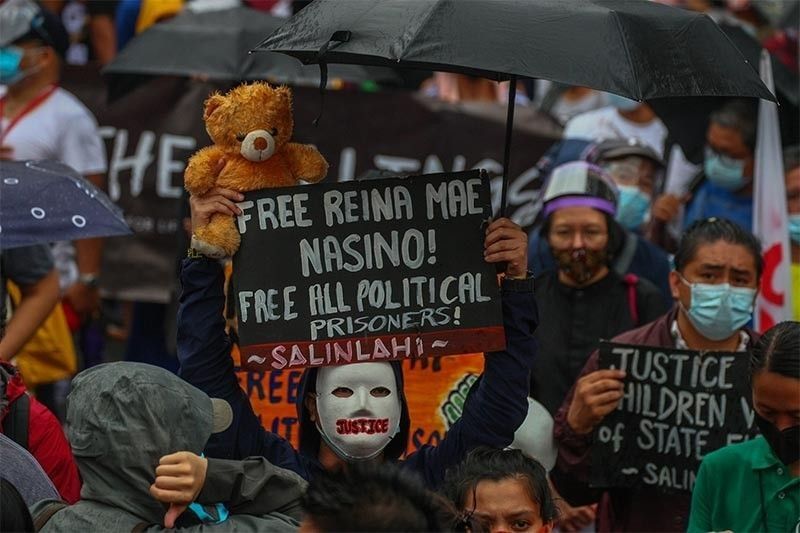 Protesters hold a rally in celebration of International Human Rights day near Malacanang Palace in Manila on December 10,2020.

MANILA, Philippines — The string of arrests done by the police on International Human Rights Day has alarmed the human rights commission, who called on authorities to address "doubts and allegations" surrounding the detention of trade union organizers and a journalist.

Six members of the group Defend Jobs Philippines were detained on December 10 based on a search warrant by Quezon City trial court executive judge Cecilyn Burgos-Villavert, who in 2019 also issued search warrants that led to the arrests of dozens of activists in Negros and Manila.

The group had since decried the move over what they said was a result of authorities planting evidence such as firearms and explosives.

"Such arrests are cause for concern given that there were statements by families and concerned personalities alleging irregularities and errors in the said operations," said lawyer Jacqueline de Guia, a spokesperson for the CHR. "including the fact that arrests were made in the midsts of red-tagging of activists and human rights workers."

International watchdog Human Rights Watch has hit the arrests as highly questionable as it noted that it is not the first time for the Philippine National Police to face allegations of planding evidence to justify arrest.

"Human Rights Watch has previously documented illegal planting of evidence by police in cases of ordinary Filipinos gunned down by police in the government’s ‘drug war.’ There is also a damning history of such underhanded police actions against political activists that correctly arouse suspicions," said Phil Robertson, HRW's deputy Asia director.

The commission said PNP should address the "anomalous arrests" especially after no less than President Rodrigo Duterte said the administration would honor its treaty obligations in prioritizing human rights as part of its agenda.

Failure to turn this into action would then render these commitments as mere words, the CHR continued.

Ironically, Duterte's remarks came days after he declared that he had no care for human rights, apart from telling cops to "shoot first" in anti-illegal drug operations that have seen nearly 8,000 dead per official figures by the police.

"If these pledges will remain as words, then we would not only fail the human rights cause, but this would also render hollow the government’s primary assertions that it will abide by its obligation to uphold the rights of all," de Guia said.

Edre Olalia, president of the National Union of Peoples' Lawyers, has said that the charges filed on the seven are the usual complaints slapped against activists as he said such is the surest way to lock them up.

Rights group Karapatan has also noted that more than 400 political prisoners had been arrested under the Duterte government, all of whom are accused of the said charge including Reina Mae Nasino and recently, Amanda Lacaba Echanis.