Church versus church harmful to democracy

THE competing church endorsements of political candidates do not bode well for secularism, the bedrock of democratic rights and freedoms. Taking sides may lead to religious fundamentalism, the kind that grips failed states and rationalizes the intolerance of diverse opinions.

The INC move was expected. Politicians court its support during elections because of its “command votes.” In contrast, the Catholic church is generally apolitical, although it influences public policies regardless of who sits as president.

In fairness to these groups, other religious organizations have also taken sides, including El Shaddai, the Kingdom of Jesus Christ of Apollo Quiboloy and various evangelical sects. But because the Philippines is predominantly Roman Catholic, people take notice when the clergy takes a position on issues. 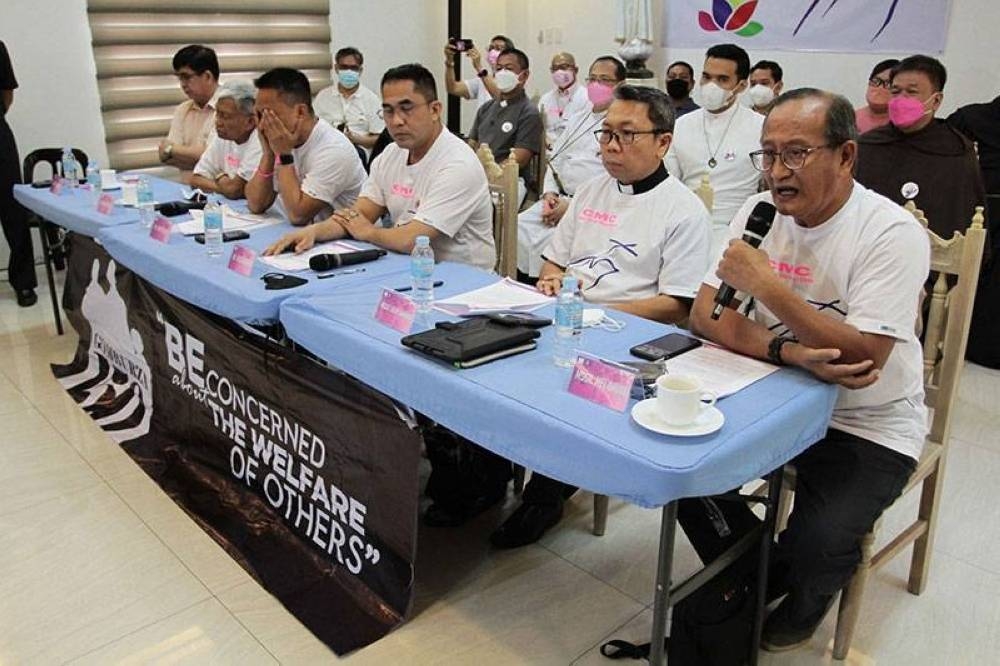 Priests from the group Clergy for the Moral Choice announce their support for the candidacy of Vice President Maria Leonor “Leni” Robredo and Senator Francis “Kiko” Pangilinan at a news briefing at Belfry Cafe in Intramuros, Manila on May 4, 2022. PHOTO BY MIKE ALQUINTO

That said, the Catholic clergy's reason for ditching neutrality seems flawed. Many of them have explained that they their political action is meant to oppose the candidacy of Mr. Marcos, simply because he is the son of the late president Ferdinand Marcos Sr. His critics hate any type of tagging, yet ironically they call him a dictator and variations of that label.

Thinking that one's political camp holds a monopoly on virtues, while accusing a rival group of having none, is dangerous. This is how religious fundamentalists in other countries rationalize terrorism and violence against others who do not share their beliefs.

For all his and his family's faults, Mr. Marcos, the candidate, is not without virtues. The clergy and Miss Robredo's camp may disagree with his pronouncements and even abhor his family's past, but the fact that the Marcoses remain popular suggests that Mr. Marcos possesses something admirable, at least to some people.

To attribute his popularity to supposedly lying, revising history and trolls that brainwash voters is a terrible misreading of public sentiments. Besides, supporters of Mr. Marcos dispute the allegations against him, and experts have provided context and corrected false impressions.

As such, the Catholic clergy might be out of touch with their flock. People, even the poor, are more intelligent and discerning than what they are given credit for by church leaders.

As for the INC and the others, their endorsements seem fairly straightforward, which is to gain political power and influence. That is also problematic because that can skew public policies, giving the endorser an unfair advantage and special privileges. In democratic governments, every citizen is supposed to be equal before the law.

Another point to consider is that discarding or diminishing secularism may be harmful to democracy. Our political system guarantees freedom of expression, precisely because free societies accommodate broad and even opposing views. People may tire of debates and look down on compromise, but those are hallmarks of a functioning democracy.

We are not experts, but Canon or religious law seems more rigid. There is no compromise between good or evil. No one wins debates with God, who is omniscient. That does not apply to matters of this world, where the laws of man rule instead.

Granted, Canon law does allow church officials to engage in politics. The principle of separation of church and state pertains more to keeping the government from interfering with religious affairs, rather than the other way around. But the clergy should reflect on this old adage: just because they can, does not mean they should.

We prefer the church to remain neutral in elections and above politics. Too late now, though.

Like it or not, election outcomes will disappoint some people. But as the saying goes, the voice of the people is the voice of God. If that is true, the clergy should reflect on why their political advice is not swaying enough voters. Perhaps church leaders are the ones not listening, maybe because they do not like what they are hearing.