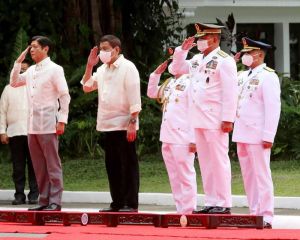 AFTER six years as the country's president, Rodrigo Duterte returned to his hometown as a private citizen.

After departure ceremonies in Malacañang on Thursday, Duterte flew to Davao City.

“Mag-commercial flight siya (He will take a commercial flight),” outgoing National Security Adviser Hermogenes Esperon said in an interview on the sidelines of the event in Malacañang.

Duterte capped his presidency on Thursday by welcoming Ferdinand “Bongbong” Marcos Jr. at the Palace before Marcos' inauguration at the National Museum.

Marcos arrived at Malacañang Palace past 10 a.m. and was greeted by Duterte at the top of the grand staircase.

He signed the guestbook before spending a few more moments with Duterte.

Duterte skipped the traditional car ride that would have brought him and Marcos to the National Museum.

The country's first president from Mindanao had contemplated seeking another electoral post after his term.

He initially accepted the nomination of the Partido Demokratiko Pilipino-Lakas ng Bayan (PDP-Laban) party to become its candidate for vice president, only to change his mind and announce his retirement from politics in October last year.

A month later, Duterte filed his certificate of candidacy for senator but backed out of the Senate race in December.

In a public address earlier this month, he urged Filipinos to “come to terms with reality” and support the country's new leaders.

Duterte had said the country's next leader should be “compassionate and decisive.”

“President-elect Marcos would need the cooperation and help of everybody. We must give it to him,” he said.