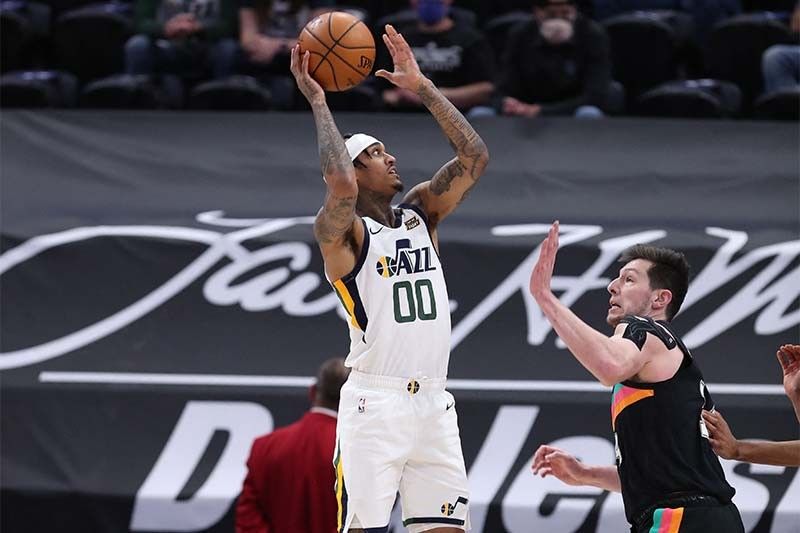 MANILA, Philippines (Updated 11:42 a.m.) — Jordan Clarkson has led the Utah Jazz back to the top of the standings in the Western Conference.

This after scoring a game-high 30 points on 12-of-16 shooting on Wednesday (Thursday, Manila time) in a blowout win over the San Antonio Spurs, 126-94, at Vivint Arena in Salt Lake City.

The Jazz held control of the game virtually throughout the 48 minutes of the game save for a couple of lead changes in the opening quarter where the Spurs led by a bucket.

Handing San Antonio their fifth loss in a row, the Jazz led in the game as much as 41 points.

The win improved Utah's record to 48-18, which helped them overtake the Phoenix Suns who lost to the Atlanta Hawks today, 103-135.

The Bucks had to hold off the Wizards until the final buzzer when a 3-pointer by Bradley Beal and a Russell Westbrook steal almost helped Washington stun the Bucks in the final possession of the game.

Jrue Holiday and Giannis Antetokounmpo paced the Bucks with 29 and 23 points, respectively.

Meanwhile, Beal had a game-high 42 points in the losing effort.

In the other games, the Boston Celtics and Portland Trail Blazers handed their respective opponents identical 36-point blowouts.

The Celtics beat the Orlando Magic, 132-96, while the Blazers defeated the Cleveland Cavaliers, 141-105.

The Memphis Grizzliess, for their part, fended off the Minnesota Timberwolves, 139-135.

The Sacramento Kings and Philadelphia 76ers also got wins over the Indiana Pacers and Houston Rockets, respectively.

In the last game of the day, the Denver Nuggets doused the surging New York Knicks, 113-97.