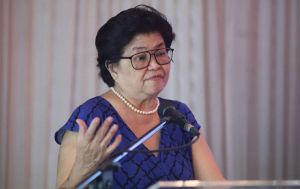 (UPDATE) CLIMATE change, not the territorial dispute with China or the Russia-Ukraine conflict, is the real threat to the country's security, incoming national security adviser (NSA) Clarita Carlos said Thursday.

Carlos said environmental concerns create a chain reaction affecting food, human and national security, especially among developing countries like the Philippines which bear the brunt of the effects of global warming.

The 76-year-old Carlos said the so-called powerhouse nations' vow to cut carbon emissions by 2030 will remain a promise since many of them have gone back to using source1s of energy that are harmful to the environment.

“India is going back to coal, some countries are going back to using fossil fuel. That is the reality on the ground,” Carlos said during a roundtable discussion with the Philippine Council for Foreign Relations (PCFR) in Pasig City.

“The promises of de-carbonization by 2030, 2050, they are by the wayside in the meanwhile because human survival is at the highest premium,” she said.

The Philippines, she noted, has one of the best environmental laws in the world. The problem is that they are not being fully enforced.

The Marcos administration, she said, can consider giving tax breaks to buyers of electric vehicles to entice more motorists to switch from fossil fuels whose prices have been skyrocketing.

Further pushing the use of solar energy is another solution, taking advantage of the Philippines being a tropical country, especially amid disasters and calamities, Carlos said.

One proposal is to establish solar farms in military camps to reduce their dependence on power from grids that are disrupted during typhoons or earthquakes.

All these make up the “broad strokes” of a general security strategy Carlos said she will present to President-elect Ferdinand “Bongbong” Marcos Jr.

“I will have the President design the national strategy. I can present to him a draft, in broad strokes,” she added.

The Philippines has been strongly urging developed nations to ramp up their assistance to developing countries that continue to grapple with climate change.

Several weeks ago, President Rodrigo Duterte called on wealthier nations to be held accountable for failing to reduce their carbon emissions.

Marcos, meanwhile, has been invited to attend the 2022 United Nations Climate Change Conference, or COP27, to be held at the Egyptian resort city of Sharm el-Sheikh in November.