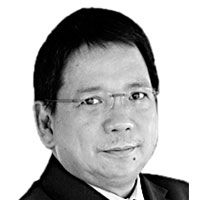 This is a morbid race. The world is keenly watching which collapses first: Ukrainian resistance to the invasion or Russia’s financial system.

Either way will bring costs to the entire global economy. The costs will come in the form of soaring energy prices, a general economic slowdown and disruptions in critical supply chains.

The French finance minister minced no words when he said the objective of the sanctions imposed against Russia is to collapse her financial system. That is certain. But it could happen, painfully, in slow motion.

Over the years, Vladimir Putin has been building what has been described as a “fortress economy” to precisely blunt the sanctions imposed on Russia today. That effort included amassing over $630 billion in foreign reserves.

He underestimated the magnitude of the sanctions, however. The sanctions in place froze $1 trillion in Russian assets held abroad. As the UN General Assembly vote showed, there is broad international consensus to punish Russia for its aggression.

The day after G-7 sanctions were announced, the ruble’s exchange value dropped through the floor, losing 30 percent of its value. So did the Moscow stock exchange, losing 40 percent of market capital before trades were suspended.

With the two largest Russian banks cut off from the global transactions system, a bank run has ensued. The Russian banking system does not have enough liquidity to fight off the bank run that is happening.

A number of remarkable things happened the past week, magnifying the effect of the sanctions. Switzerland abandoned its generations-long neutrality and participated in the sanctions. Norway and Finland likewise abandoned their traditional neutrality, offering assistance (including lethal weapons) to Ukraine. Germany broke its policy of never exporting arms to send weapons to the Ukrainians.

The effect of the sanctions has been magnified by unprecedented corporate activism. Both Shell and British Petroleum decided to unload their holdings in Russian oil firms. The Norwegian sovereign wealth fund is selling down in Russian investments, even at a loss. The shipping giant Maersk announced it is not serving Russian ports. Japanese tech firms are withholding critical technology exports to Russia.

European and North American air space is now closed to Russian flights. Turkey is controlling the movement of warships through the narrow strait leading to the Black Sea. The International Olympic Committee and nearly all the major sports federations have excluded Russia and several major sporting events scheduled in the country this year have been cancelled. The Taekwondo Federation even withdrew the honorary black belt it once awarded to Putin.

Russia’s isolation is now nearly total. But that will almost be as painful to the rest of the world as to the Russians.

Russia, after all, is the world’s 11th largest economy. The country supplies 40 percent of Europe’s natural gas needs and 25 percent of the continent’s oil. Energy costs are bound to spike, first in Europe and then across international markets.

The large industrial economies have tried to mitigate upward price pressures by releasing supplies from their strategic reserves. This cannot go on indefinitely. The strategic stocks are finite. After they are exhausted, crude prices could jump up to as much as $150 per barrel – possibly even more.

In 1979-80, when oil prices rapidly escalated, the global economy was forced into a recession. That recession affected even our ability to service our debt, opening the road to the crippling debt crisis of the early eighties and the uprising of 1986.

We can only watch the movement of oil prices with bated breath. While we are entirely dependent on imported oil, we are a small market with no means to influence global price movements.

The false prophets who try to convince us that we could determine the price of oil by re-nationalizing our miniscule oil industry are lying. Our domestic oil market is not even large enough to support our oil refineries. All of them, technologically behind the curve, are now closed.

There could be a looming food crisis too.

Russia and Ukraine supply a substantial portion of the world’s wheat, especially to the Middle East and North Africa. Should that supply source be curtailed, international flour prices are bound to spike. Our pan de sal is bound to shrink even more.

Should the fighting expand beyond Ukraine, all bets are off. It will be time for all of us to hunker down.

President Duterte, who once described Russian president Vladimir Putin as his “idol,” is convening a high level meeting of officials and businessmen to discuss the situation in Ukraine. That meeting can only be useful if it is focused on mitigating measures we can take in the face of the global economic fallout from the war.

It can no longer be a meeting to define our foreign policy position. Earlier this week, the Philippines supported a strongly worded UN General Assembly resolution condemning Russia’s invasion and calling for international support for Ukraine.

The Philippine vote at the UNGA is a principled one. It stands on the bedrock of non-aggression and respect for sovereignty. The community of nations cannot long persist without affirming these bedrock principles.

We hope the President will not waffle in the face of a ballooning global crisis. He might be an admirer of Putin but that does not mean he cannot condemn him for his aggression.

The nation is in for tougher times. But the challenges should not make us lose sight of the principles that make the world livable. We have to accept the costs of doing what is right.