Share
Colombians will make a choice for president between a leftist senator and a populist businessman in a run-off contest in June after none of the six candidates in Sunday's first round got 50 per cent of the vote.

Colombian voters opted for a dramatic change in presidential politics, choosing a leftist former rebel and an outsider populist businessman to advance to a runoff election in June amid hopes a new face can pull them out of the economic damage from the pandemic.

Leftist Sen. Gustavo Petro led the field of six candidates Sunday with just over 40 per cent of the votes, while real estate tycoon Rodolfo Hernandez, who has no close ties to any political parties, finished second with more than 28 per cent, election officials reported.

Both are far from the conservatives and moderates that have long governed the South American country.

Petro, the front-runner throughout the campaign, could become Colombia's first head of state from the left, which for years has been marginalized for its perceived association with the nation's armed conflict. Hernandez, whose showing surprised many, has been compared to former U.S. President Donald Trump for his anti-establishment rhetoric.

They will face off June 19 amid the same polarized environment and growing discontent over increasing inequality and inflation that shadowed the election's first round. A candidate needed 50 per cent of the votes to win outright in the opening round.

There has been a series of leftist political victories in Latin America as people seek change at a time of dissatisfaction with the economic situation. Chile, Peru and Honduras elected leftist presidents in 2021, and in Brazil, former president Luiz Inacio Lula da Silva is leading the polls for this year's presidential election. Mexico elected a leftist president in 2018.

Looking at areas where Hernandez won in some of Colombia's most traditional heartland departments, "the rejection of the status quo even among many of the most conservative Colombians … really does show a disgust with the traditional workings of Colombian politics," said Adam Isacson, an expert on Colombia at the Washington Office on Latin America think-tank.

Petro's main rival for most of the campaign had been Federico Gutierrez, a former mayor of Medellin who was seen as the continuity candidate and ran on a pro-business, economic growth platform. But Hernandez began to move up strongly in recent polls heading into the election.

Petro has promised to make significant adjustments to the economy, including tax reform, and to change how Colombia fights drug cartels and other armed groups. Hernandez has few connections to political parties and promises to reduce wasteful government spending and to offer rewards for people who report corrupt officials.

"What is in dispute today is change. The political parties allied to the government of [incumbent Ivan] Duque, his political project, has been defeated in Colombia," Petro told his supporters as they celebrated at his campaign headquarters in Bogota. "Colombia's total vote launches that message to the world: A period is ending; an era is ending."

Hernandez, in a livestream after early results showed he advanced to the runoff, said he remains firm on his commitment to end "corruption as a system of government."

"Now, we enter the second period, and these next few days will be decisive in determining the future of the country," he said.

This was the second presidential election held since the government signed in 2016 a peace agreement with the Revolutionary Armed Forces of Colombia, known as FARC for its initials in Spanish. But the divisive agreement was not a main issue during the campaign, which focused on poverty, inflation and other challenges exacerbated by the pandemic.

It is Petro's third attempt to become president. He was defeated in 2018 by Duque, who was not eligible to seek re-election.

In a sign of the resistance to a leftist government, Gutierrez endorsed Hernandez shortly after he failed to advance to the runoff.

"Knowing that our position is decisive for the future of Colombia, we have made a decision…. We do not want to lose the country," Gutierrez said, adding that he would support Hernandez because he does not want to put Colombia "at risk."

Petro was once a rebel with the now-defunct M-19 movement and was granted amnesty after being jailed for his involvement with the group.

Hernandez, the former mayor of the north-central city of Bucaramanga, surged in recent polls with promises to "clean" the country of corruption and to donate his salary. Some see a partial connection between him and Trump.

"They share that they have speeches against the establishment, against that traditional policy, not only seen from the government, but from the traditional opposition," said Johan Caldas, a political analyst at Universidad de la Sabana. "They are far from any type of structure, from formalisms, from partisan thoughts that end up precisely convincing people, who find an option for change, that is just far from the traditional left or right." 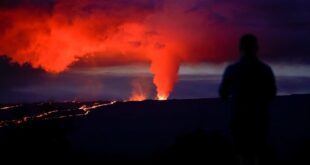