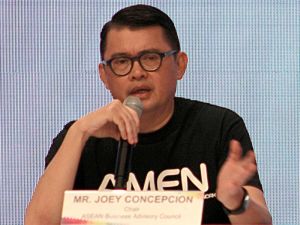 LOCAL government units should be given the leeway to make decisions regarding mask-wearing as a protection against Covid-19 infection in their jurisdictions, Presidential Adviser for Entrepreneurship Jose Maria “Joey” Concepcion 3rd said Friday.

Concepcion was referring to the recent directive of Cebu Gov. Gwendolyn Garcia to make the wearing of masks optional in open areas and well-ventilated places across the province.

Mask-wearing is still mandatory as far as the government's Inter-Agency Task Force Against Covid-19 is concerned.

“We should respect the Duterte administration's rules, but I think the next administration should allow local government units in setting rules on whether a face mask will be required,” Concepcion said at a televised briefing.

He agreed with Garcia that the wearing of masks outdoors “should be encouraged but not mandated.”

Wearing of face coverings, however, must be strictly observed indoors, especially in small spaces and at large gatherings, at least until the Duterte administration ends, especially with the slight increase in the number of coronavirus infections in the country, Concepcion said.

“I don't think we should move into that level of risk. Indoors, we should still continue to insist that our people wear face masks inside restaurants and malls, etc.,” said Concepcion.

He said he suggested the same provision on mask wearing to President-elect Ferdinand “Bongbong” Marcos Jr. in their recent meeting.

“And I think in the next administration, pag-usapan natin. At noong nag-meeting kami ni President-elect BBM, he is open to the idea naman (Let's talk about it. When Marcos and I had a meeting, he said he was open to the idea),” Concepcion noted.