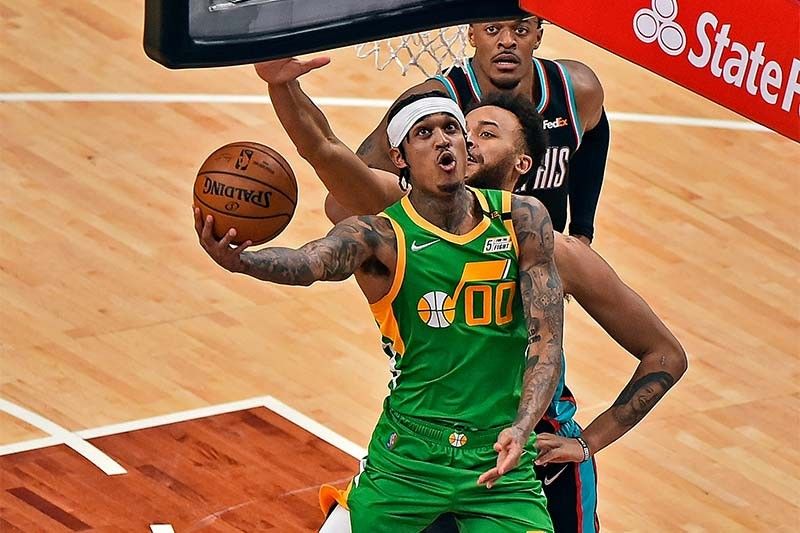 MANILA, Philippines – Mike Conley and Filipino-American Jordan Clarkson were the go-to scorers for the Utah Jazz in their seventh win in a row, defeating the Memphis Grizzlies, 111-107, in Tennessee on Wednesday (Thursday, Manila time).

Without top scorer Donovan Mitchell, who did not travel with the team to Memphis due to personal reasons, Conley and Clarkson connived to keep Ja Morant and the Grizzlies at bay as the Jazz tightened their hold on the top spot in the NBA standings.

Conley and Clarkson were two of three Jazz players who scored more than 20 points with 26 and 24, respectively.

Bojan Bogdanovic chipped in 23 points in the victory.

The troika's efforts were enough to make up for Mitchell's absence and an off-night for big man Rudy Gobert, who was limited to just eight points in 36 minutes of action.

The Jazz had to stave off a Grizzlies comeback in the dying seconds of regulation when Morant got Memphis to within two, 107-109, with 7.3 ticks left.

But two charities from Royce O'Neale would put them up again by four with just 3.9 remaining.

Morant then missed a 3-pointer in the game’s final possession to seal the win for the Jazz.

The 2020 NBA Rookie of the Year finished with 36 points in the losing effort.

Elsewhere, the Miami Heat evened out their win-loss slate after a 92-87 victory over the Indiana Pacers.

Duncan Robinson led five Heat players in double-digit scoring with 20 points to help hold off the Pacers and get the win.

Myles Turner paced Indiana with 15 points in the loss.

For their part, the Portland Trail Blazers routed the Detroit Pistons, 124-101, for their fourth win in a row.

The win came on the back of a 33-point performance from Damian Lillard.

The Brooklyn Nets also won over the Houston Rockets, 120-108.